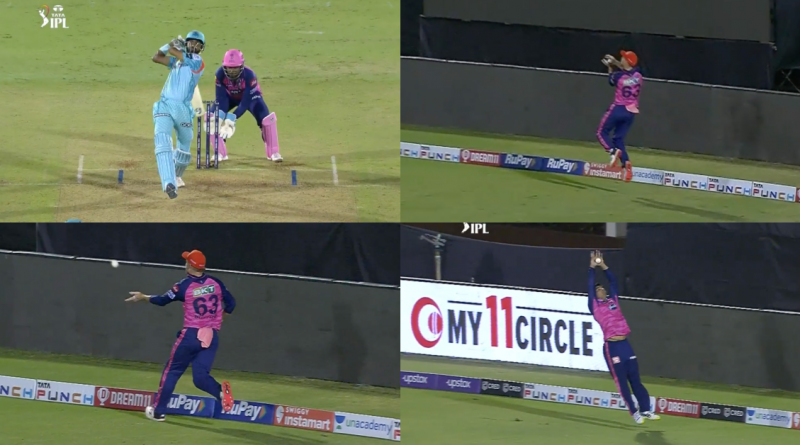 
The duo of Rajasthan Royals (RR) players Jos Buttler and Riyan Parag pulled off an absolutely stunning catch to dismiss Lucknow Super Giants (LSG) all-rounder Krunal Pandya in the 63rd match of the Indian Premier League (IPL) 2022 at the Brabourne Stadium in Mumbai on Sunday, May 15.

All-rounder Krunal Pandya was having a good partnership with Deepak Hooda while chasing the target against Rajasthan Royals before he was dismissed by off-spinner Ravichandran Ashwin on the first ball of the 14th over. Krunal was able to score 25 runs off 23 balls, including one four and one maximum.

Notably, on the first ball of the 14th over Krunal came down the track to smash the lofted straight swipe. The ball went flat and RR fielder Buttler was able to grab a perfect catch to his right and then, while being in the air, he lobbed the ball to his partner, Parag, who was coming in from long-off. Parag did no mistake as he stretched up and back and was able to grab the catch easily.

While chasing the target, Lucknow Super Giants were off to a poor start as Quinton de Kock and Ayush Badoni were dismissed by Trent Boult in the 3rd over. Also, skipper KL Rahul was dismissed by Prasidh Krishna in the 6th over.

At the time of writing, Lucknow Super Giants were at 115/4 with Deepak Hooda and Marcus Stoinis out in middle.

Earlier, Rajasthan Royals were able to score 51/1 in the powerplay overs after losing the wicket of orange cap holder Jos Buttler.

Meanwhile, RR skipper Sanju Samson was dismissed for 32 by pacer Jason Holder in the 9th over. Then, Ayush Badoni broke the 26 runs partnership between Devdutt Padikkal and Yashasvi Jaiswal by dismissing the latter.

In the end, Parag, James Neesham, Ravichandran Ashwin and Trent Boult made significant contributions to help RR post 178/6 on the board.