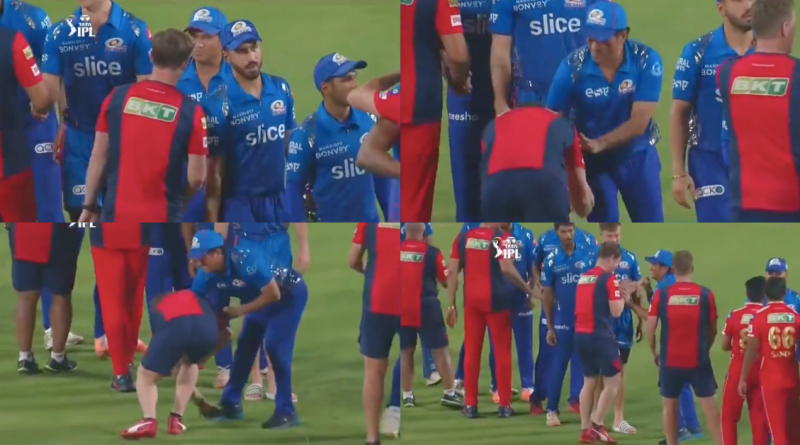 PBKS had set a target of 199 for the Mumbai team courtesy of twin fifties from Shikhar Dhawan and Mayank Agarwal. Late cameos from Shahrukh Khan and Jitesh Sharma also pushed the total from what could have been a sub-par total.

In response, Mumbai began well with Rohit Sharma dominating the proceedings. Unfortunately, his dismissal saw Mumbai go back into a shell before Dewald Brevis and Tilak Varma revived the run chase.

The teenagers looked in great touch. During the association, Brevis smashed 29 runs off Rahul Chahar’s over, including the biggest six (112m) of the IPL 2022 season so far.

Unfortunately, the lack of batting depth meant that the responsibility was left to Suryakumar Yadav. He played well for his 43 but couldn’t take his team over the line.

Following the conclusion of the game, the teams were seen shaking hands as usual and Rhodes came across Tendulkar. He playfully tried to touch Tendulkar’s feet to take his blessings. Rhodes has previously worked alongside Tendulkar when he was part of the Mumbai franchise.

Watch the moment between Jonty Rhodes and Sachin Tendulkar here:

i missed this last night why is he like this😭 pic.twitter.com/AnlnoyZgOp