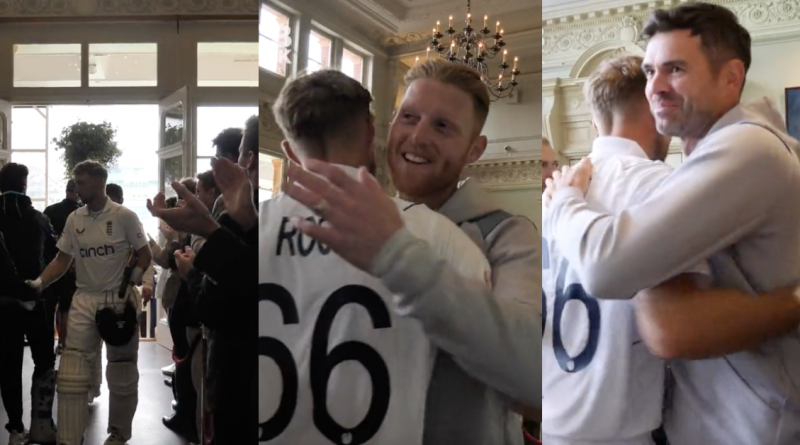 
England batter Joe Root had a tremendous outing in the fourth innings of the Lord’s Test where he paved the way for a memorable victory against New Zealand courtesy of his 26th hundred.

Root, overnight on 77, needed 23 runs for his century and also to breach the 10,000-run mark in Test matches. England was also well on its way to a victory needing only 61 runs for a 1-0 lead in the 3-match series.

He went on to score 115 off just 170 balls, ensuring that the English team starts off its new era under Ben Stokes‘ captaincy with a win. Following the victory, Root received standing applause in the Lord’s longroom.

Watch Joe Root being greeted by his teammates here:

During the knock, Root joined Alastair Cook as the only other English player to have gone past 10,000 runs in Test cricket. Coincidentally, both reached the landmark at the same age (31 years, 5 months, 5 days).

They are now the joint-record holders for the youngest to reach 10k runs. The 31-year-old Root also has the chance to go past the tally of Younis Khan and Sunil Gavaskar with two more games remaining in the 3-Test series against the Kiwis.

Following the 5-wicket victory for England, the two teams will now head to the Trent Bridge in Nottingham where the second Test gets underway on June 10.

Also Read – IPL 2022: After First 2 Games, I Was Under Pressure; Coaches And Management Backed Me Really Well – Mukesh Choudhary