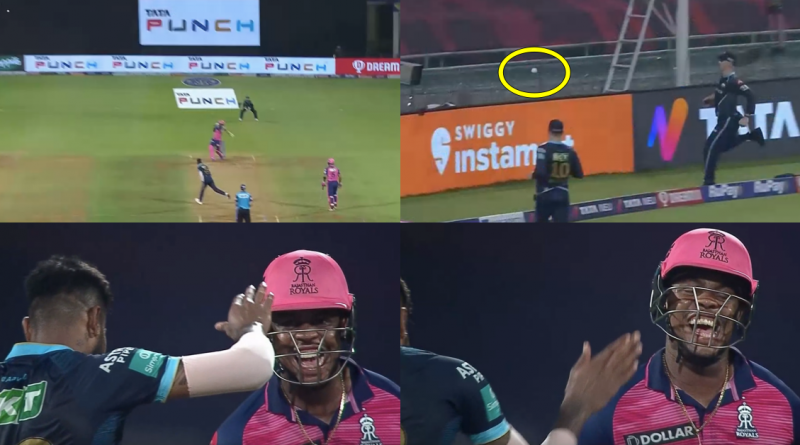 Gujarat Titans (GT) captain Hardik Pandya was seen high-fiving Rajasthan Royals (RR) batter Shimron Hetmyer after he was hit for a four by the West Indian left-hander as RR and GT clashed in the 25th match of the IPL 2022.

Chasing a tough target of 193, RR batting couldn’t get going at any stage, as only Jos Buttler made 54 in 24 balls with 8 fours and 3 sixes and Shimron Hetmyer made 27 in 19 balls, while Riyan Parag tried his best, but could only make 18 runs.

On the other hand, Devdutt Padikkal (0), R Ashwin (8), Sanju Samson (11), and Rassie van der Dussen (6) all failed to get going. Lockie Ferguson and Yash Dayal were the notable wicket-takers for the GT side.

One of the batters who showed a glimpse of a fight was Hetmyer, who was seen taking on the likes of Hardik Pandya and Mohammad Shami. In fact, Hardik Pandya even high-fived Hetmyer after he hit him for a four on his ball.

Meanwhile, after being invited to bat first as RR captain Sanju Samson won the toss, the GT innings was all about Hardik Pandya, as he slammed 87* in 52 balls with 8 fours and 4 sixes. He got great support from Abhinav Manohar (43 in 28 balls) and David Miller (31* in 14 balls with 5 fours, 1 six) as the Gujarat Titans put on 192/4 in 20 overs.

It was an amazing batting performance from Pandya, especially after Matthew Wade (12) and Shubman Gill (13) and then Vijay Shankar (2) departed early.

Also Read: Sachin Tendulkar Would Get Involved In Every Meeting, Knew This Could Be His Last- Suresh Raina On 2011 World Cup