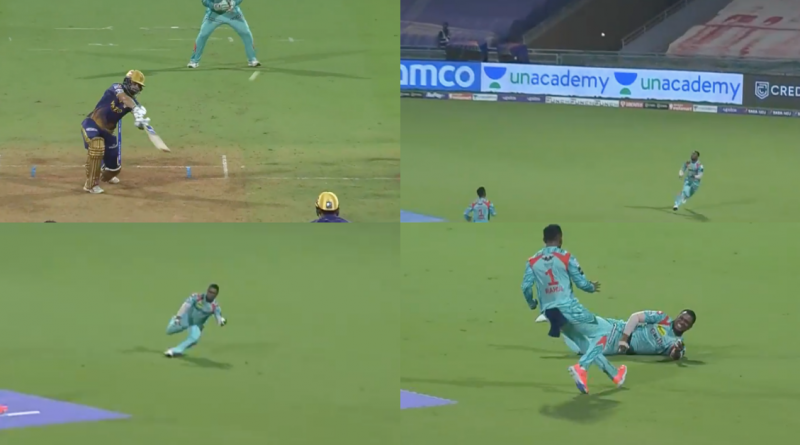 
Evin Lewis took an extremely astonishing catch to get rid of a dangerous-looking Rinku Singh during the 66th match of the IPL 2022 between Kolkata Knight Riders (KKR) and Lucknow Super Giants (LSG) at the DY Patil Stadium on May 18, 2022.

This was a must-win game for KKR to remain in contention for the playoffs, while Lucknow needed a win to qualify for the playoffs officially. KL Rahul of LSG did well to win the toss and chose to bat first.

They made three changes to their XI with Krunal Pandya out with a niggle and Dushmantha Chameera and Ayush Badoni dropped. This meant K Gowtham, Evin Lewis, and Manan Vohra came in. KKR meanwhile brought in Abhijeet Tomar for Ajinkya Rahane.

Quinton de Kock and KL Rahul hammered them to all parts of the DY Patil Stadium adding 210 runs in the process while remaining unbeaten. This was the highest-ever opening partnership in IPL history.

But then they departed very close to the target and it was left to Rinku Singh and Sunil Narine to do the needful and they almost did it. Narine remained unbeaten on 21 in 7 balls, while Rinku made 40 in 15 balls with 4 sixes and 2 fours.

His innings came to an end in a thrilling final over, when 21 were needed and he had hit four and two sixes. But he tried to go for one more off Stoinis, managing to sky it over cover. Lewis sprinted 30 yards and dove while sticking out his left paw to claw onto the ball.

In the end, KKR feel 2 runs short of the target and as a result were eliminated from the IPL 2022, while LSG qualified for the playoffs.