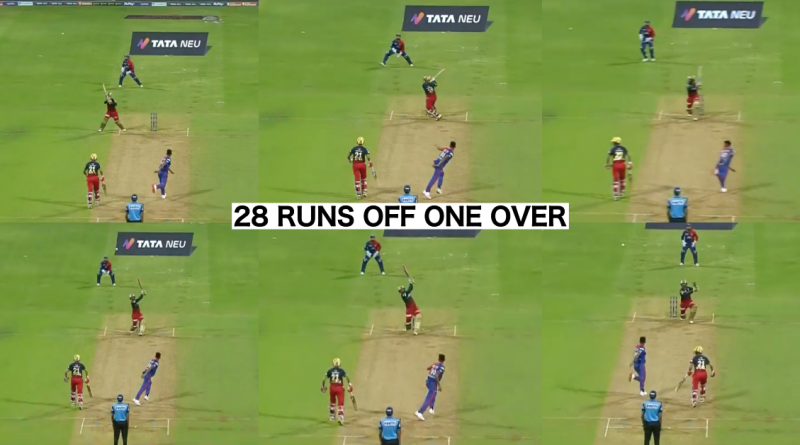 Royal Challengers Bangalore (RCB) keeper-batter Dinesh Karthik meted out some severe punishment to star Delhi Capitals (DC) bowler Mustafizur Rahman as the two teams clashed in the second match of the double-header day in IPL 2022 on April 16, 2022, at the Wankhede Stadium in Mumbai.

The toss saw Rishabh Pant of DC winning it and choosing to bowl first. Delhi made one change as Sarfaraz Khan was benched to bring in Mitchell Marsh. Royal Challengers Bangalore also made one change as Harshal Patel came back into the XI for Akash Deep.

RCB had the worst possible start to their innings as Anuj Rawat was dismissed by Shardul Thakur for a golden duck. Then Shahbaz Ahmed got rid of RCB captain Faf du Plessis for 8 runs. Virat Kohli’s rotten luck continued as despite looking good for his 12, he was run out thanks to a brilliant fielding effort from Lalit Yadav.

And then Harshal Patel got the wicket of dangerous Suyash Prabhudessai, who had impressed on his debut in last match against the Chennai Super Kings for 6 runs only.

Dinesh Karthik Propels Royal Challengers Bangalore To A Good Total; Hits Mustafizur Rahman For 28 Runs In One Over

RCB still had hopes of getting to a good total as Glenn Maxwell was still at the crease, but his knock came to an end as Kuldeep Yadav had him caught for 55 runs with 7 fours and 2 sixes. In walked perhaps the most in-form RCB batter in Dinesh Karthik.

He warmed up by hitting Khaleel Ahmed for a six in the 17th over before the floodgates opened in the 18th over as left-arm seamer from Bangladesh Mustafizur Rahman, who had given 20 runs off 3 overs previously.

Dinesh Karthik took him apart hitting 4 fours and two sixes in that over, taking him for a total of 28 runs. In the process, he also completed his half-century in 26 balls, his 20th in the Indian Premier League. He ended the innings on 66* in 34 balls with 5 fours and 5 sixes in total, while Shahbaz finished on 32* in 21 balls with 3 fours and 1 six.

His innings propelled RCB to a very daunting total of 189/9 in 20 overs.

DC vs RCB: Watch – Dinesh Karthik Demolishes Mustafizur Rahman; Hits Him For 28 Runs In One Over: