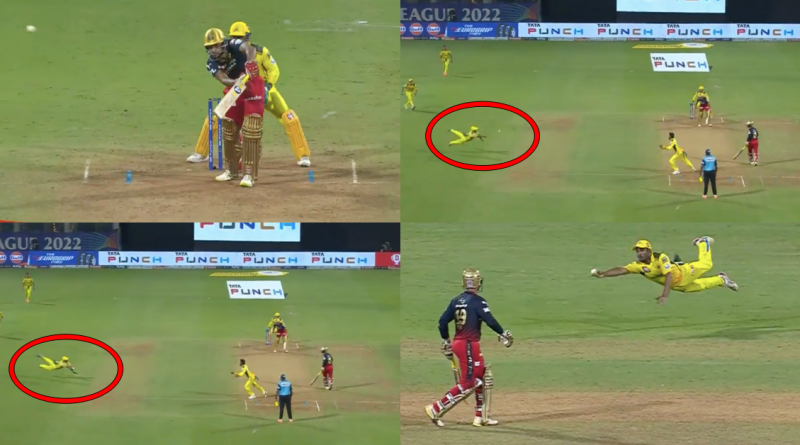 Ambati Rayudu might be 36-year-old, but during the CSK vs RCB IPL 2022 match, he showed everyone how agile and fit he really is, as he dived to take a blinder one-handed catch to dismiss Akash Deep off Ravindra Jadeja’s bowling.

This all happened when the two old rivals in Chennai Super Kings (CSK) took on Royal Challengers Bangalore (RCB) at the DY Patil Stadium in Navi Mumbai in the 22nd match of the Indian Premier League (IPL 2022).

The match was expected to be a humdinger, but it was CSK who showed how to make a comeback from losing four matches in a row. RCB captain Faf du Plessis won the toss and chose to bowl first. RCB made two changes to their playing XI giving debuts to Suyash Prabhudessai and Josh Hazlewood as they replaced Harshal Patel and David Willey respectively.

Both the batters hit their IPL best scores as Robin Uthappa posted 88 in 50 balls which included 9 sixes and 4 fours. He was caught by Virat Kohli off Wanindu Hasaranga. Shivam Dube continued the carnage as he remained unbeaten on 95 in 46 balls with 8 massive sixes and 5 fours to his name.

While it was a huge target for the RCB team to chase, Glenn Maxwell with 21 in 11 balls, Suyash Prabhudessai with 34 in 18 on IPL debut, and Shahbaz Ahmed with 41 in 27 balls tried to keep up to the rising run rate.

However, once they fell, it was Dinesh Karthik who tried his best with 34 in 14 balls. HE was running out of partners at the other end and one of those was Akash Deep. Deep tried his best to counter the CSK spinners but managed to last only two balls.

His innings came to an end courtesy of a brilliant catch by Ambati Rayudu who dove to his right and plucked a one-handed beauty out of thin air.