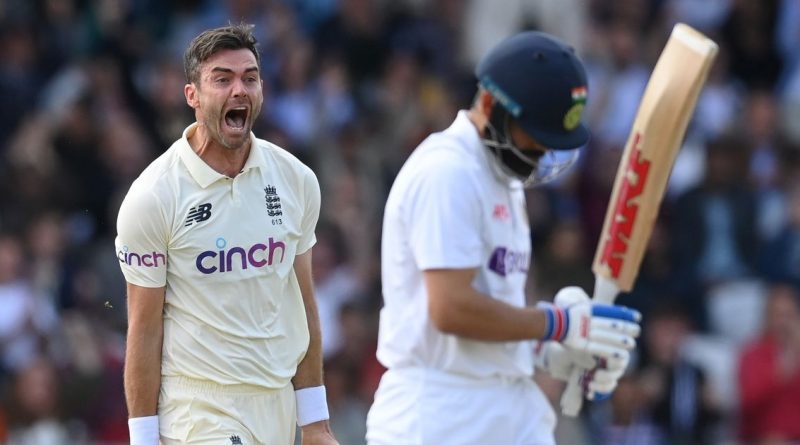 India captain Virat Kohli has struggled with the bat in the ongoing series against England, making just one half-century and averaging 24.80.

Kohli has struggled against the swinging ball, with James Anderson and Ollie Robinson both dismissing him twice across five innings.

And former England captain Nasser Hussain has analysed Kohli’s struggles, highlighting a “slight technical issue” and stating that “it’s not going to get any easier for him” in the final two Tests.

In his column for the Daily Mail, Hussain wrote: “India do have a lot of strength of character and fight, and central to that is their captain, even though Kohli has looked more like the 2014 version rather than the one who conquered English conditions and England’s attack in 2018.

“Kohli has played at balls he could be leaving, he seems to have that slight technical issue with the positioning of his back foot and he is not picking up the line of Anderson and Robinson.

“He did go through a spell on the third day, admittedly against an older ball, where he was leaving it well.

“But it’s harder to leave the new ball because it swings later, and he was out again on Saturday in a familiar manner.

“Kohli is not sure whether to play or leave and whether to set himself for the inswinger or not. He doesn’t know what to do. It’s high class bowling and it’s not going to get any easier for him.”

Former India captain Sunil Gavaskar believes Kohli needs to “keep it simple” with his shot selection, telling Sony Sports: “See how far from the body the bat is, that’s what’s getting him into trouble.

“He is reaching out. So it’s hard hands stuff that is getting into trouble. I don’t think standing outside the crease is a worry.

“If you play closer to your body, you play and miss it. There is no harm in playing and missing it

“I think it’s the shot selection. You have got to keep it simple. He has got 8000 runs, probably the last 6,500 runs he has got standing outside the crease.

“So I don’t think he needs to make too many changes. I think it’s just the shot selection.”