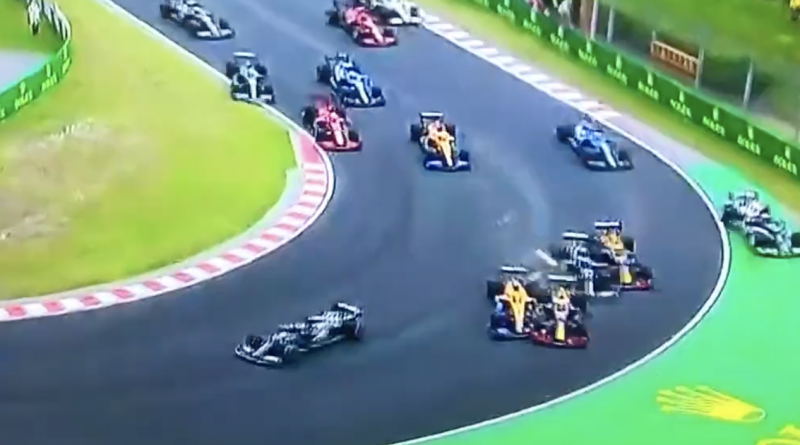 
Max Verstappen has been involved in a first corner crash at the Hungarian Grand Prix which has seen him fall down the corner after Valtteri Bottas, Lando Norris and Sergio Perez are all involved with Lewis Hamilton in the lead

There was first corner chaos at the Hungarian Grand Prix

The Dutchman, who lined up in third, was looking to close on rival Lewis Hamilton at the start.

Rain arrived an hour before the race start creating a slippery surface which ultimately proved crucial.

Bottas fell back immediately and saw Verstappen, Sergio Perez and Lando Norris all pass him.

The Finn then broke late and smashed into the back of Norris’ McLaren which ultimately saw him hit Verstappen.

The Red Bull was forced wide and slipped down to ninth with visible damage on his career.

Verstappen had to pit which saw him tumble down to 13th before the race was red flagged amongst the chaos.

Several drivers crashed at turn one, which saw Max Verstappen tumble down the order

A host of drivers now find themselves out of the race after just a matter of laps.

Ferrari’s Charles Leclerc has retired as did Bottas, who will likely be blamed for the first lap mess.

Wet races often shake up the pack and, following the red flag, Esteban Ocon finds himself in second ahead of Sebastian Vettel’s Aston Martin.

Carlos Sainz is in fourth ahead of Yuki Tsunoda and Nicholas Latifi.

Hamilton retained the lead from pole position and will now be heavy favourite to claim an eight victory in Budapest.

The Mercedes driver could lead the Hungarian capital with the championship lead depending on whether Verstappen can stage a recovery driver.

The incident comes just a fortnight after the two F1 title contenders clashed at Silverstone.

Hamilton went on to win the British Grand Prix despite being handed a 10-second penalty for clipping Verstappen, who subsequently retired.