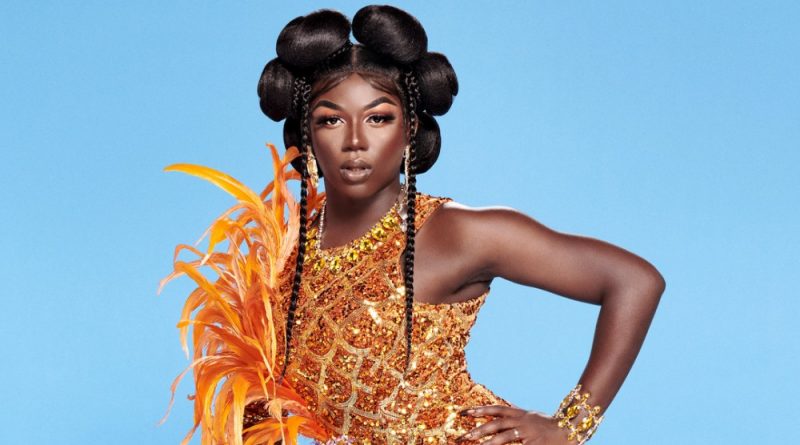 This week’s Drag Race UK gave us one of the highlights of the series: the comedy challenge.

Comedy legend Kathy Burke joined the judging panel as the final four put on a hilarious roast, in front of an audience of the eliminated season three queens.

Some queens got more laughs than others. In the end, it was Vanity Milan – south London’s lip-sync assassin herself – who left the competition after losing out to Krystal Versace.

Vanity Milan had only been pursuing drag for a year when she entered the show. During her time on series three her drag went from strength to strength, as she defied expectations to storm into the final four. She’ll be remembered for her incredible stage presence, that Yoda voice and her signature orange looks.

PinkNews caught up with Vanity to hear more about her time on the show.

Hi Vanity! What was it like watching your exit from the show back all these months later?

Knowing that my time was coming to an end, I think I prepared myself for that moment. It’s always good watching myself on TV, because it’s always a surprise. And I surprised myself, I’m like: “Wow, I actually did okay, better than I thought I did!”

You were this year’s lip-sync assassin. You sent home three queens, which was your favourite lip-sync?

Who did you pick as your biggest competition at the start of the show?

All of them! Because I’ve been doing drag only for a year and I’ve known some of these queens from working in the drag scene.

What has the support from south London been like throughout your time on the show?

I’m from Mitcham and the support from south London itself has been really good. There’s a lot of messages from fans saying: “You’re where I’m from and it’s one of the best feelings to see someone like us on a platform like Drag Race UK.”

You spoke about your family on the show, what was their reaction to seeing you on TV?

They’ve loved to see me shine the whole time. My dad said I’ve been myself the whole time, which is a little bit shady, a loving and kind person and also unapologetically myself. I’ve stayed true to myself.

Some people have felt like the judges’ critiques have been overly harsh this year, what did you think of the critiques you were given?

I like to be critiqued, so that I can come back next week and show you what I can do. Yeah, there were a few misses with the feedback. But you know, it’s a TV show and it’s meant to entertain. So at the end of the day, I understood the assignment and I took those critiques on board and I came back.

It’s amazing that you had only been doing drag for a year when you entered the show, do you have any advice for anyone thinking of putting themselves out there like you did?

Put yourself out there. I wanted to go on this show to give my career a bit of a boost and also give people who have helped me, people I know in the drag scene, a boost too. I applied and completely forgot I applied until I got the phone call. Then I thought: “I’ve only been doing drag for a year, what the hell am I gonna do now?” But it’s one of the biggest platforms for drag. So yeah, go for it. Be confident in yourself.

Was there anyone on the show this year who you think left before their time?

I’m gonna be a little controversial here and say that all of them had something more to show. I’ve seen all their work and how amazing their looks were for what the categories were going to be. So I was a little bit like: “Oh, you’ve all should have come back somehow.” So it was good to see them all this episode. I think Charity Kase definitely had a lot more to show, because I was the next station over from her and there were some amazing looks she had. She gave everything and the kitchen sink when it came to her looks and the runway.

Who was your favourite guest judge this year?

Alesha Dixon. Because she gave me life and it was a dream come true. It was one of the best moments.

Is there one of the final three who you think has the edge going into the final week?

I plead the fifth! I love them all and they all deserve to snatch the crown.

You mentioned the lack of diversity on the show in your comedy set this week, do you wish season three had been more diverse?

One hundred per cent. The UK has so much more to offer when it comes to diversity. It’s not just about the colour of your skin: it’s drag kings, it’s AFAB queens and other types of performers. Yes, I wish there were more queens of colour and different types of POC performers on the show. It was such a shame and it was such a miss, because there are so many amazing POC performers out in the cabaret world and in the drag scene. I was missing a sister in the workroom. Because, you know, they were giving me critiques about makeup and asking the other queens to help me with makeup. And I felt a bit down, sometimes, because there was no one of my complexion. It was a bit difficult but I got through it.

Would you consider returning for All Stars?

One hundred per cent. I have so much more to give.

Your husband designed all your runway outfits, what was it like watching it back with him?

It was an emotional rollercoaster. I think the last episode was the first time I’ve actually seen him cry, because he created a majority of the looks for Drag Race while working a full-time job. And also during the pandemic and the lockdown. He worked so hard. Watching it back, he’s a bit critical and he can be hard on myself but it’s been such a blessing. He’s actually sewing right now.

There’s been a lot of discussion about fan behaviour and online trolling. What has that been like for you?

I’m going to say 50/50. Actually, no, it’s more love than it is hate. There are still trolls out there who think it’s OK to post negativity all over your profile. Social media is a very heavy place for negativity. But I’m all about spreading love and positivity. And that’s what I focus on. Most of the time when it comes to social media, I want to be uplifting the people around me and the fans as well. Without the fans there would be no show. I just love the love that we get from the fans, so I can ignore the trolls.

What’s next for Vanity Milan?

Vanity Milan hit the ground running. So I’m definitely open to all opportunities. I want to explore my musicality more. I’d love to go on a tour and do more TV and get to meet people. The sky’s the limit for me.

The Drag Race UK season three finale arrives on BBC iPlayer next Thursday (25 November) at 7pm. The rest of the season is streaming now.