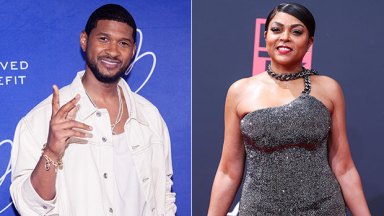 
Usher, 43, had a very special guest at his Las Vegas residency on Sunday, September 11. Taraji P. Henson, 52, attended the show and was welcomed on stage by Usher in honor of her birthday being that same day. “We got grown and sexy in the house tonight,” Usher said to the audience, as the Empire actress joined him on stage while dressed in a sexy silver dress.

To @tarajiphenson and all the birthday girls that celebrated with me last night….

Usher and Taraji danced up a storm on the stage. The pair’s risqué moves were recorded on video and posted on Usher’s Twitter and Taraji’s Instagram. The “Yeah!” hitmaker, who wore a white jacket and black jeans, let Taraji show off her moves on her own, before he joined his famous friend for some joint dance moves. Taraji grinded on Usher and dropped it low towards his thighs, and Usher seemed to be enjoying every minute of it!

Alongside Taraji’s video of the wild dance performance, the actress wrote, “Soooooo about last night!!! Thank you @Usher #wehadatimelastnight #birthdaybehavior#virgoseason.” Taraji also included footage of herself dancing in the audience to Usher’s show before she went on stage. She shared an additional video from her appearance on the stage and thanked Usher for “an amazing birthday.”

Usher, meanwhile, shared a 1-minute video of his and Taraji’s on-stage antics. The footage included the moment that Usher got on his knees and admired Taraji as she danced in front of his face. “To @tarajiphenson and all the birthday girls that celebrated with me last night…. Do yo dance it’s yo birthday.. #UsherMyWay,” Usher captioned the video.

Usher: My Way — The Las Vegas Residency kicked off on July 15 at Dolby Live and will conclude on October 29. This is Usher’s second residency in Vegas and his first at MGM Grand Las Vegas. The Grammy Award winner has welcomed a slew of famous faces onto the stage at his shows, including his pal Tiffany Haddish, 42. Usher and Tiffany also displayed some provocative dance moves at the August 26 show.

As Usher’s residency continues, we expect to see more celebrities visit the show and join him on stage with more wild dance moves!