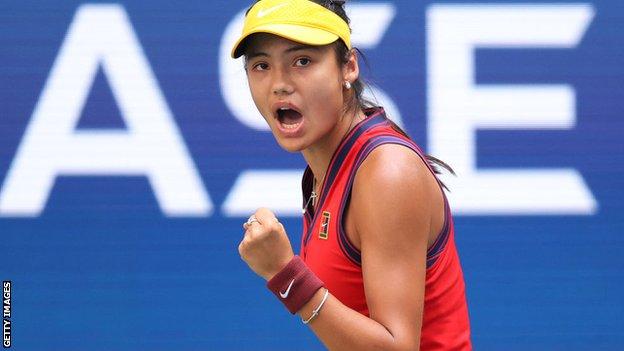 
British teenager Emma Raducanu put in another devastating performance to reach the US Open quarter-finals as her dream New York debut continued.

In the biggest match of her life, on the biggest tennis court in the world, Raducanu recovered from a break in the opening game to dominate in style.

She will face Olympic champion Belinda Bencic for a place in the semi-finals.

The Briton dropped to her knees on Arthur Ashe Stadium after sealing victory when home favourite Shelby netted a service return on her fourth match point.

Raducanu, who captured the British public’s imagination with a run to the Wimbledon fourth round as a wildcard in July, has now gone one better after a series of accomplished displays that have had pundits predicting big things ahead for the world number 150.

“It feels absolutely amazing. Shelby is a great opponent, she’s done so well in the US Open and she’s had a great week so I knew it was going to be a tough match,” the Briton said in her on-court interview.

“But I’m so happy to have come through and have managed to overcome some of the nerves at the beginning.”

Raducanu shakes off nerves on the big stage

Raducanu arrived on court with a huge smile, waving to the crowd and looking relaxed, but early nerves kicked in on a court that can house 24,000 people and where greats of the games including American Billie Jean King and Britain’s Virginia Wade were watching on.

She was broken in the first game and was in danger of going 3-0 down before digging deep for a gritty hold in her second service game, where she saved two break points.

That hold seemed to calm her nerves and she swiftly moved up the gears to take complete control of the match against the world number 43, who had upset world number one Ashleigh Barty in the previous round.

Rogers got a consolation game on the board in the second set and held off three match points but in the end it was the American who looked shell-shocked by the occasion as Raducanu reached a maiden Grand Slam quarter-final.