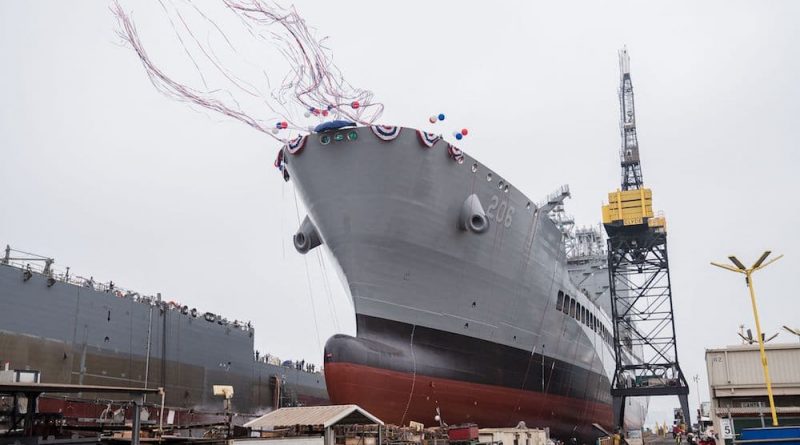 US Navy has officially christened and launched the USNS Harvey Milk, a ship named in honour of the trailblazing US politician and LGBT+ rights pioneer.

Milk became the first openly gay man in US history to be elected to public office when in 1977 he was elected to San Francisco’s board of city supervisors.

Tragically, a year later, he was assassinated by Dan White, another city supervisor who had lost his job.

Milk is well known as an advocate for LGBT+ rights and visibility, but before he began his political career, in the 1950s, he also served in the US Navy.

He was a diving officer on a submarine rescue ship during the Korean War, eventually reaching the rank of junior grade lieutenant, but at the time LGBT+ people were not allowed to serve in the US armed forces in any capacity.

When Milk’s superiors caught him in a park that was popular with gay men, his sexuality immediately came into question, and he was forced out of the Navy in 1955.

The Navy began constructing the USNS Harvey Milk in November, 2019, and on Saturday (6 November), the replenishment oiler was finally unveiled.

The ship was christened by Paula Neira, a Navy veteran and the clinical program director of the Johns Hopkins Center for Transgender Health, who broke the traditional bottle of sparkling wine across the bow.

The USNS Harvey Milk was launched in San Diego. The US Navy Fleet Oiler was commissioned by Paula Neira, the Clinical Program Director for John Hopkins Center for Transgender Health. SF Supervisor Milk was killed in office by Dan White in 1978. Milk was a Navy Vet. @nbcbayarea pic.twitter.com/P1aPq9CWF2

According to LGBTQ Nation, at the ceremony San Diego mayor Todd Gloria said: “Harvey was a beacon of hope not just for LGBT+ people, but all Americans. Now, this ship will serve as a symbol of hope for the world to see.”

Truly honored to join @SecNav and so many federal, state, and local leaders for the christening of the USNS Harvey Milk. Harvey was a beacon of hope not just for LGBTQ people, but all Americans. Now, this ship will serve as a symbol of hope for the world to see. #ForAllofUs pic.twitter.com/QmfSDOkPfp

Carlos Del Toro, secretary of the Navy, added: “For far too long, sailors like Lieutenant Milk were forced into the shadows or, worse yet, forced out of our beloved Navy.

“That injustice is part of our Navy history, but so is the perseverance of all who continue to serve in the face of injustice… The secretary of the Navy needed to be here today, not just to amend the wrongs of the past, but to give inspiration to all of our LGBT+ community leaders who served in the Navy, in uniform today and in the civilian workforce as well too, and to tell them that we’re committed to them in the future.”

Thanks to everyone who made the USNS Harvey Milk possible- especially all of you who physically built her.❤️ May she share hope all around the world. #hope @GDNASSCO #USNavy @SECNAV75 @SECNAV #USNSHarveyMilk #ThankYou #HarveyMilk https://t.co/KelpTCKsVz

Milk’s nephew, Stuart, gave the principal address at the ceremony, and said: “We have to teach our history to prevent ourselves from going backwards and repeating it… Today, we are celebrating something much bigger than tolerance… [The] Navy not only recognises, but honours those [other LGBT+ servicemembers]… so this Navy ship sends an important message to the world.”

The USNS Harvey Milk is the second in a fleet of six ships named after civil and human rights leaders. As well as Milk, they include Sojourner Truth, Chief Justice Earl Warren, Robert F Kennedy, suffragist Lucy Stone and representative John Lewis of Georgia.