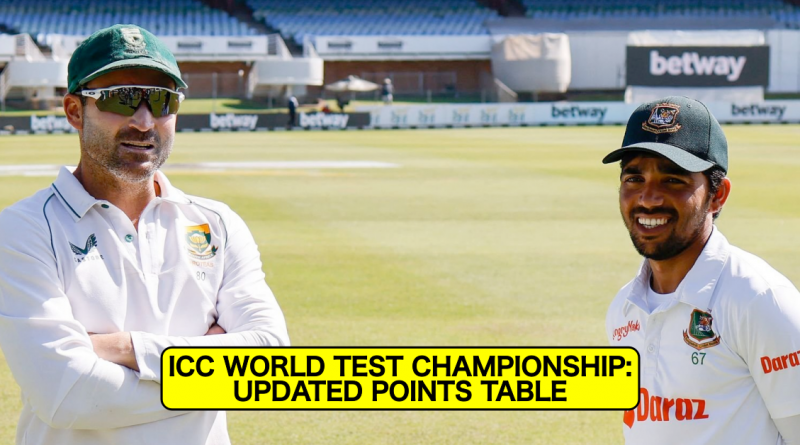 
South Africa on Monday thrashed Bangladesh by 332 runs in the second Test to wrap the two-match Test series 2-0 at the St George’s Park in Port Elizabeth. South African spinners Keshav Maharaj and Simon Harmer once again rattled the visitors on Day 4 of the second Test in the first session itself.

Bangladesh resumed Day 5 at 27/3 with skipper Mominul Haque walking out with senior batter Mushfiqur Rahim. Just like in Durban, where the visitors lost seven wickets on the morning of the fifth day to register their second-lowest total in Test cricket of 53.

The only thing that progressed was their innings total in Port Elizabeth as Bangladesh’s innings bundled up at 80 in 23.3 overs. Maharaj was again the man who haunted them as a wrecker-in-chief with his incredible numbers of 7/40, his eighth five-wicket haul in the traditional format. Harmer chipped in with three wickets to complement his spin partner.

Earlier in the game, South Africa posted 453 as Maharaj top-scored with 84 in the first innings. Bangladesh were bowled out for 217 in the first innings, leaving a trail of 236 runs. The Proteas declared at 176/6 in the second innings to leave the visitors with an enormous target of 413.

Dean Elgar did an excellent job leading us: Keshav Maharaj

With this emphatic Test series win against Bangladesh, South Africa amassed 60 points in seven games of the ICC World Test Championship 2021-23 cycle. Dean Elgar and his men are behind Australia, who are leading the table with 72 points and a win percentage of 75.

Maharaj, who claimed 16 wickets in the two-match series, was awarded the player of the series for his absolute dominance with the turn. Maharaj credited skipper Dean Elgar for his remarkable leadership.

“Really happy. First to see the team cross the line, obviously, we know the conditions were difficult and probably not suited for us, but full credit to the team. Dean did an excellent job leading us and the guys were clinical in the series,” Maharaj said in the post-match presentation.

“Dean and the coach had a chat with me (after the first innings of the first Test), they said you’re doing the right thing and you’re time will come, there will be a situation in the second innings and ever since I have not looked back.

“I was just trying to do the right things. I just repeated my processes from the time I started playing domestic cricket, few minor tweaks here and there. I am happy enough to get the reward. I don’t really look at my stats,” he added.

Earlier in January, South Africa won the 2-1 Test series against India and squared 1-1 against New Zealand in their backyard in February.