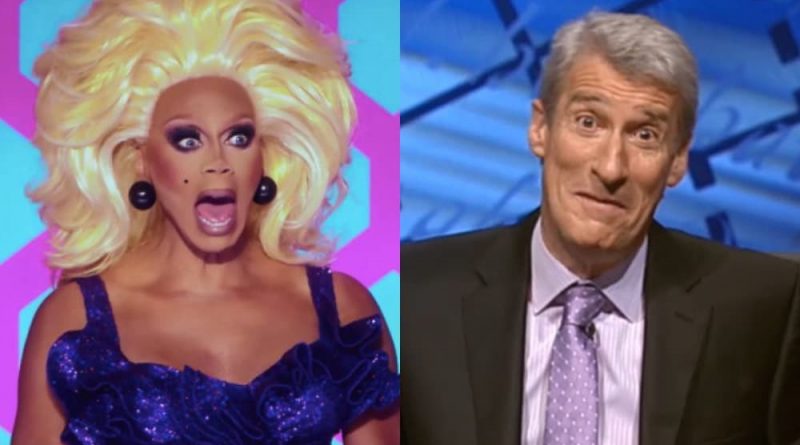 There was a shocking RuPaul’s Drag Race themed bonus category round on the British quiz programme University Challenge, and the answers were shocking. (World of Wonder)

Worlds collided when a Drag Race question popped up on BBC’s University Challenge, and one competitor accidentally shaded a legendary queen.

Emmanuel College Cambridge was up 55 points against their competition from St Andrews University during the Monday (2 August) episode of the British quiz programme.

About halfway through the show, host Jeremy Paxman revealed Emmanuel would face a bonus category on “public figures impersonated by contestants” on the US version of Drag Race.

Paxman introduced the final question. He said: “Impersonated by Alaska in All Stars series two, a US stage and film actress born in 1893. Her films include She Done Him Wrong and I’m No Angel, although she’s largely now remembered for her much-quoted wit.”

One teammate thought Dame Joan Collins was the actress born in 1893, before being convinced by another player that it was actually American drag queen Lady Bunny who was born 128 years ago.

Unfortunately and hilariously, the correct answer was Mae West.

Alaska shared a clip of the University Challenge mix-up on her Instagram. She joked that Lady Bunny “was indeed born in 1893” before adding that “sadly that answer is incorrect”.

Fellow Drag Race star Courtney Act also joined in with the ribbing in Alaska’s comment section. She said the bonus round was “already brilliant”, but the “unintentional Lady Bunny shade really makes this top shelf content”.

Lady Bunny herself even commented about the accidental mix-up in a hilarious post on Instagram. The legendary queen wrote that the mistake on University Challenge was her “made it” moment on British TV.

Drag Race fans across the internet enjoyed the accidental shade

This is one of the best unintentional reads I’ve ever heard https://t.co/QnFt8huKHo

Not a University Challenge team answering “Lady Bunny” when asked which stage and film actress born in 1893 was depicted by Alaska on All Stars 2? 1893! 💀 pic.twitter.com/BTuI1X2CRT

The idea of Lady Bunny being born in 1893 <3 Shady ladies. #UniversityChallenge pic.twitter.com/eCo1AG0kM1

I’m sure Lady Bunny will enjoy being mistaken for Mae West – but not the suggestion that she was born in 1893. https://t.co/BIM4X5SYC5

At the end of the programme, St Andrews managed to secure victory after a tight battle with Emmanuel College – winning by only five points. Emmanuel College has time to brush on Drag Race trivia as the team could still progress through to the next stage of the University Challenge as one of the highest-scoring losing teams.