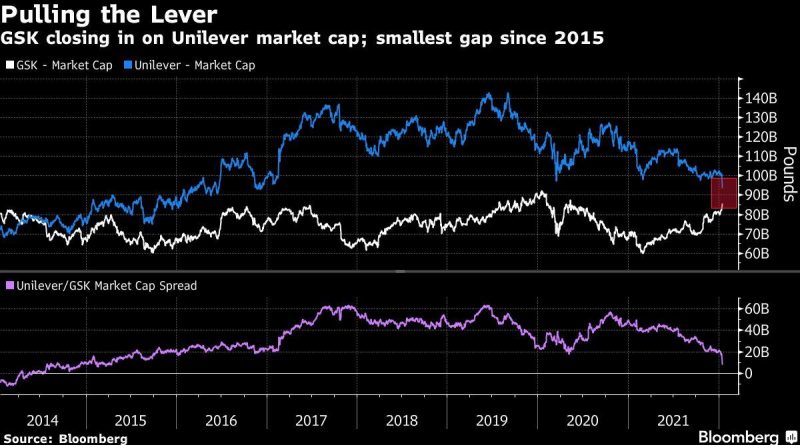 
(Bloomberg) — Unilever Plc would need to raise its bid for GlaxoSmithKline Plc’s consumer health-care unit by about 7.3 billion pounds ($10 billion) to have a hope of winning the backing of GSK’s board, according to analysts, traders and brokers polled by Bloomberg News.

A bump to 57.3 billion pounds is needed, based on the average estimate from 11 analysts, traders and brokers in Bloomberg’s informal survey, with predictions ranging from 54 billion pounds to 65 billion pounds. Glaxo, which said in December it would spin off the business, rejected three bids from Unilever, with the last at about 50 billion pounds.

While Unilever could increase its offer to about 55 billion pounds, “we are very doubtful this will be sufficient to persuade the GSK board or GSK investors,” analysts at Citigroup Inc. wrote in a report Monday. The stock component of the offer, plus the tax bill that Glaxo would face on the cash proceeds, are among the reasons it may not go for the deal, they wrote.

Morgan Stanley’s event-driven desk sees an enterprise value for the Glaxo consumer health-care unit of 59 billion pounds to 72 billion pounds, assuming growth of 4% to 6%. Given that, it’s clear why Glaxo and minority partner Pfizer Inc. rejected offers up to 50 billion pounds.

Speculation that they would be more open to a price in the region of 60 billion pounds would make sense, the Morgan Stanley event-driven desk said.

Taking an improved bid for the consumer business — instead of a midyear initial public offering — would serve Glaxo better, giving it firepower to boost its drug pipeline, said Bloomberg Intelligence analyst John Murphy.

Unilever has held talks with banks about additional financing for a potential sweetened offer for the Glaxo unit, according to people familiar with the matter. Analysts who follow Unilever scorned the proposed acquisition, saying it doesn’t make sense and would be too expensive.