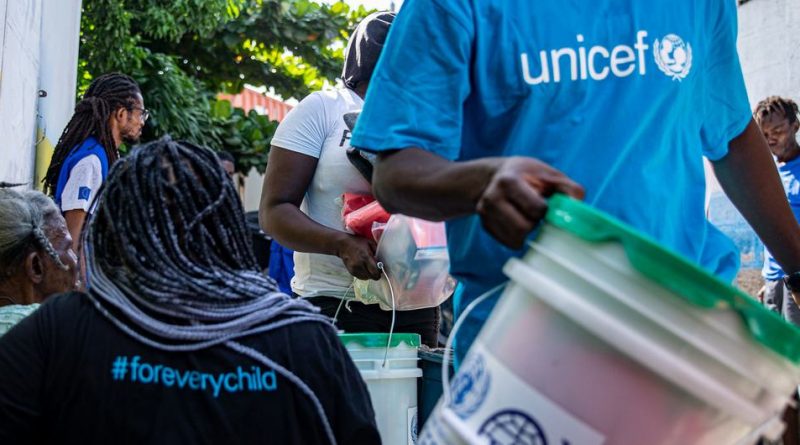 
Vulnerable inhabitants of the commune of Cité Soleil as well as those in other neighbourhoods of the capital, Port-au-Prince, have received items such as hygiene and baby supplies, plastic sheeting, jerry cans for water, blankets, solar lamps and repair items for houses from the UN’s International Organization for Migration (IOM).

The World Food Programme (WFP) distributed food including rice, beans, and oil, which can feed 15,000 for a week.

According to the UN, between 8 and 17 July over 471 people were killed, injured or unaccounted for.

Serious incidents of sexual violence against women and girls, as well as boys being recruited by gangs, have also been reported.

Around 3,000 people have fled their homes, including hundreds of unaccompanied children, while at least 140 houses have been destroyed or burnt down.

Humanitarian Coordinator, Ulrika Richardson, has called on all parties to end the deadly violence and ensure an open humanitarian corridor to Cité Soleil.

She said needs there are “immense and are growing due to poverty, lack of basic services, including security, and a recent spike in violence. The UN is committed to continuing to deliver aid to the most vulnerable children, women and men in need, in line with the principles of humanity, neutrality, impartiality and independence.”

Access to healthcare is limited or non-existent with many centres closed and limited access for medical staff to the area, while food and water has been in short supply.

“UN humanitarian agencies are providing immediate life-saving assistance in Cité Soleil,” said Ms. Richardson, “but a more sustainable and holistic approach needs to be found for the medium and longer-term development of this emblematic commune which has a strong human potential, so that unmet needs can be satisfied; this should include protection, and a return to a life of dignity for its inhabitants.”

The UN provided direct assistance to the most vulnerable based on a coordinated joint needs assessment undertaken by IOM, UNICEF and WFP in Cité Soleil.

It is working with Haiti’s civil protection agency (DGPC), the Office for Citizen Protection (OPC), the Economic and Social Assistance Fund (FAES), other local and government agencies as well as other actors in order to provide a more comprehensive response to the vulnerable communities.

Cité Soleil with a current estimated population around 300,000 is one of the most deprived communes in Port-au-Prince and its humanitarian and development needs were huge even before the current upsurge in violence.

The Humanitarian Coordinator calls on all parties to remain committed to end the deadly violence and ensure an open humanitarian corridor to Cité Soleil to allow unhindered access to emergency humanitarian and medical assistance, for all residents.