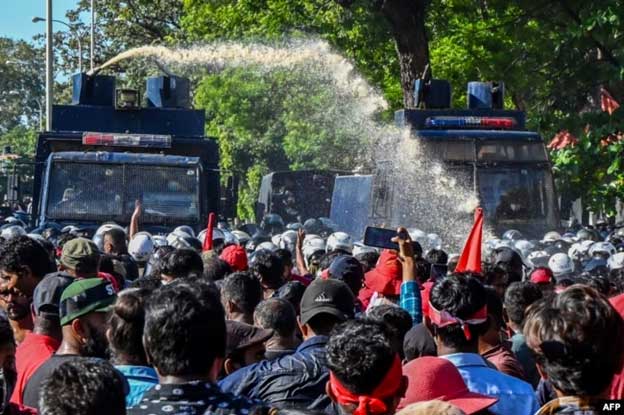 UNITED NATIONS, Oct 10 (IPS) – The United Nations has singled out 42 countries (out of 193 member states) for condemnation– virtually blacklisting them– for retaliating against human rights activists and journalists

If you cooperate with the United Nations and complain about human rights abuses in your home country, chances are you will find yourself either jailed, persecuted, tortured or under government surveillance.

The 42 countries include some of the world’s worst authoritarian regimes with a notoriety for extensive human rights abuses.

Highlighting a number of “disturbing trends” over the past year, the annual report by UN Secretary-General Antonio Guterres details how people — mainly victims of human rights violations, human rights defenders and journalists – suffered reprisals and intimidation by States and non-State actors.

This included people being detained, targeted by restrictive legislation and surveilled both online and offline. People who tried to cooperate with the UN, or were perceived as doing so, were also affected.

In a third of the countries named in the report, individuals and groups, including civil society organizations (CSOs), either refrained from cooperating or only agreed to report their cases anonymously out of fear of reprisals.

“Despite positive developments, including pledges and shared commitments by Member States against reprisals, this report shows the extent to which people are pursued and persecuted for raising human rights concerns with the UN”.

“And we know that, shocking though this number is, many cases of reprisals are not even reported,” says Assistant Secretary-General for Human Rights Ilze Brands Kehris.

Dr. Simon Adams, President and CEO of the Center for Victims of Torture, the largest international organization that treats survivors and advocates for an end to torture worldwide, told IPS the UN is an impartial humanitarian organization dedicated to the advancement of humanity.

“When some states or armed groups perceive civil society activists or journalists speaking to the United Nations as constituting a threat to their interests, they are violating the ‘faith in fundamental human rights’ that the UN Charter proudly encapsulates,” he said.

‘We the peoples,’ where ever we may be in the world, have a right to speak directly to UN representatives without some malevolent authority leaning over our shoulders, tapping our phone, or threatening us with detention or disappearance,” he said.

Human rights defenders in the countries mentioned in the UN Secretary-General’s report not only deserve our respect and solidarity, they need protection, declared Dr Adams.

When Secretary-General Antonio Guterres last week congratulated Ales Bialiatski and the organizations Memorial and the Centre for Civil Liberties on being awarded the 2022 Nobel Peace Prize, he said this year’s recognition shines a spotlight on the power of civil society in advance of peace.?

“Civil society groups (CSOs) are the oxygen of democracy, and catalysts for peace, social progress and economic growth. They help keep governments accountable and carry the voices of the vulnerable into the halls of power”. ?

Yet today, civic space is narrowing across the world, the Secretary-General warned. ?

“As we congratulate this year’s winners, let us pledge to defend the brave defenders of universal values of peace, hope and dignity,” Guterres said.

Under Vladimir Putin’s leadership, she pointed out, “the country has seen its political opposition crushed, grassroots NGOs and activists outlawed, independent media shuttered, and civil society as a whole scorched to the ground”.

“Russia’s unlawful aggression in Ukraine could not be a clearer demonstration of Vladimir Putin’s longstanding disregard for life and human rights.”

Callamard said the establishment of this important mechanism will be a long overdue lifeline to civil society in Russia, independent media and many others standing up to repression.

“We call on all states to support the swift establishment of this monitoring and reporting mandate, and to fully support victims of human rights and humanitarian law violations committed by the national authorities”.

“We call on the Russian authorities to heed the clear message that the Human Rights Council sends with the establishment of this mechanism, and to fundamentally change course to cease its violations at home and abroad,” she declared.

Providing an update on the military regime in Myanmar, UN Spokesperson Stephane Dujarric told reporters October 6, that according to UNESCO (United Nations Educational, Scientific and Cultural Organization), at least 170 journalists have been arrested since the military takeover in Myanmar in February last year.

Forty-four journalists, which include seven women, have been sentenced for criminal offences by local courts, he said. Also, media workers report that they experience digital surveillance of mobile phones and social media platforms. UNESCO remains committed to protecting and defending their press freedom.

Meanwhile, the UN report said the surveillance of individuals and groups who cooperate with the UN continued to be reported in all regions with growing evidence of online surveillance and cyberattacks. The massive digital shift accelerated by the COVID-19 pandemic also increased challenges relating to cyber-security, privacy, and access to online spaces.

Another concerning global trend is the use and impact of restrictive legislation that prevents and punishes cooperation with the UN, resulting in some cases of people being sentenced to long prison terms or placed under house arrest. There were recurring and similar allegations of intimidation reported in a number of countries, which could indicate a pattern.

Another global trend is self-censorship, choosing not to cooperate with the UN or doing so anonymously amid concerns for their safety. Increased surveillance and monitoring, as well as the fear of criminal liability, have created what the report terms a “chilling effect” of silence, stopping people from cooperating further with the UN and deterring others from doing so, according to the report.

As in previous years, the report shows that intimidation and reprisals disproportionally affect certain populations and groups, including representatives of indigenous peoples, minorities or those who work on environment and climate change issues, as well as people who may suffer discrimination based on age, sexual orientation and gender.

“The risks affecting women victims, as well as women human rights defenders and peace builders, who share testimony and cooperate with the UN remain daunting. We will continue to work to ensure that all can safely engage with the UN,” Brands Kehris stressed, as she presented the report to the Human Rights Council in Geneva.

The report, entitled ‘Cooperation with the United Nations, its representatives and mechanisms in the field of human rights’ (A/HRC/51/47), including extensive annexes detailing cases country by country, can be accessed online.