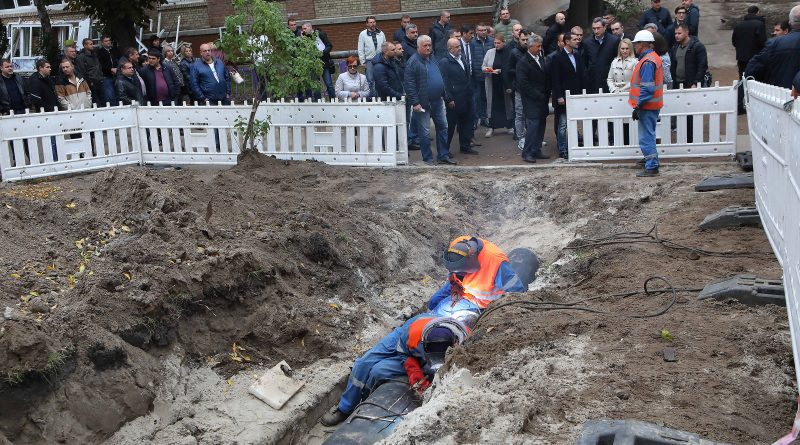 
When the Soviet Union collapsed in 1991, it left behind an unexpected gift for the climate change era. Underneath the towns and cities of Eastern Europe, Soviet planners designed vast networks of pipes that carried steam and hot water to homes, schools, shops, hospitals, and more. These centralized systems—turned on and off by officials—provided cheap and universal heating across entire municipalities. Thirty years after independence, despite serious declines in service due to underinvestment, district heating still makes up the lion’s share of heat generation in Estonia, Lithuania, and Slovakia. In Ukraine, as of 2021, 53% of urban households still relied on it, according to data shared with TIME by engineering firm Tetra Tech’s Ukraine energy security project.

That’s a big advantage in the energy transition. Though the water in district heating networks is usually warmed by coal or natural gas plants, it is relatively easy to adapt them to run off bioenergy or waste heat from sewage systems, electric power stations, or even data centers. That’s much simpler, cheaper, and potentially more energy efficient than replacing thousands of fossil-fueled boilers across a neighborhood. In Western Europe, where centralized heating networks are less common, cities are racing to develop them. They can learn from Ukraine: in recent years climate-conscious foreign donors have been retrofits of ailing systems in towns like ​Kyiv, Zhytomyr, and Kremenchuk​, as models of what is possible.

“There is great potential to reduce CO2 emissions in quantities that many cities would dream of, but [in Ukraine] we actually have the infrastructure in place,” says Carsten Rothballer, a coordinator at European cities network Local Governments for Sustainability.

But since Russia’s invasion of Ukraine, that infrastructure has become a key point of vulnerability. Over the past week, the Russians have launched their most intense attacks on Ukraine’s energy infrastructure since the spring, destroying 30% of the country’s power plants and causing “massive blackouts across the country” according to President Volodymyr Zelenskyy. Ukrainian officials believe the Kremlin has intimate knowledge of the Soviet-era heat system, and that they will try to destroy it over the winter, when temperatures in Ukraine average between 23°F and 37°F.

Kyivteploenerho workers replace the pipes of the capital’s heat network that were damaged by Russian missile strikes in Kyiv, Ukraine, on Sept. 20.

District heating is particularly at risk: unlike more decentralized systems, it needs water, electricity, and heat plants to function—as well as a steady supply of natural gas or coal. If any of those stop working for a long period of time, pipes could freeze and crack. The same thing could happen if bomb-struck buildings are left connected to the network, letting cold air in through their blasted windows, and potentially wrecking the system for entire neighborhoods.

“There has already been serious damage, but Ukrainians are doing all they can to make quick fixes,” says Diana Korsakaite, a Kyiv-based district heating specialist at engineering firm Tetra Tech. To help, the energy security program Korsakaite leads, funded by USAID, has pivoted to buying up emergency resources for cities to repair their heating systems, including almost 900 emergency power generators in case electricity is cut, more than 40 miles of steel pipe to replace broken sections of the network, and 237 mobile boiler houses that can be transported to buildings in need.

Even where district heating escapes destruction, Ukranians are bracing for cold: the country’s gas chief said in August that, due to natural gas shortages, indoor temperatures on the system would be set to around 64°F—about 7.2°F lower than normal. If the infrastructure fails, and people can’t heat their homes, it “could become a matter of life or death,” the WHO’s Europe director said Oct. 14.

The long-term fate of district heating in Ukraine will be decided by what happens after the war’s end. If faced with a shattered system and few resources, Rothballer says local governments may have to rush the repairs. That could leave service levels further depleted and setting back decarbonization efforts.

But the post-war period may well be an opportunity to accelerate Ukraine’s transition to climate leadership, Rothballer says, if it receives “substantial funding” for energy efficiency and cleaner fuel sources. (The renewed push to reduce Ukraine and Europe’s reliance on Russian natural gas will likely encourage international donors to deliver.)“We can sense a huge appetite from the Ukrainians for that,” he says. “If cities have to be rebuilt, they [want] to design them in a sustainable way.”