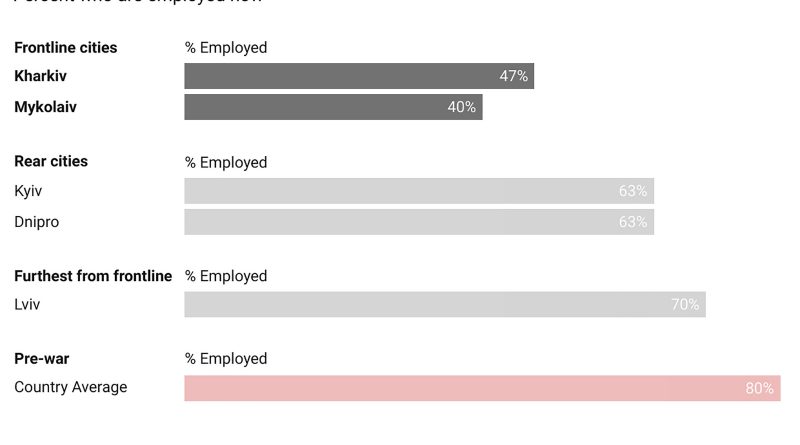 
Ukraine has shocked the world by withstanding the February 2022 Russian invasion and then reversing it around Kyiv in April and Kharkiv in September. Ukrainian society has rallied in an equally remarkable way. A series of recent polls suggests that the war has actually increased[1] the Ukrainian people’s trust in their local and national government and largely want the international community to empower them and their government to rebuild their shattered country rather than to do it for them.

Ukraine confronted the Russian invasion on an already-weak footing. Economic challenges exacerbated by COVID held Ukrainians’ attention more than the Russian occupation of Crimea and Donbas or even the threat of Russian invasion in a July-August 2021 National Democratic Institute poll. Respondents had somewhat more trust in local government than in national government and its agencies, but little confidence in any.

A September 2022 Ipsos survey shows some of the ways in which Ukrainians have suffered from the invasion. Unemployment has risen across the country and especially in frontline cities. Ukrainians who have not been displaced have suffered significant income loss. Residents of cities at or near the frontlines suffer from serious degradation of essential services, including access to safe drinking water, hot water, and heat.

But Ukraine has shown remarkable resilience in the face of a Russian attack that has deliberately targeted economic and infrastructure facilities throughout the country and not only near the front lines. The Ipsos poll shows that the majority of employed Ukrainians in major unoccupied cities surveyed are still receiving their salaries on time and, for those that are delayed, the delays are usually less than two weeks. These data suggest that Ukrainians have managed to maintain a largely functional economic and financial system despite their pre-war challenges and the ravages of a brutal invasion.

Ukraine has also managed to avoid nationalizing or seriously unbalancing its economy even as it has mobilized for war. Nearly 65% of employed respondents work in private enterprises, with 48% either self-employed or employed at small or medium-sized businesses. The survey naturally does not capture the proportion of Ukrainians currently serving with the armed forces, but the results clearly show that a private economy providing normal services continues to operate despite the horror of war and the rigors of mobilization.

Ukrainians are also finding ways to keep essential services functional in key frontline cities despite constant Russian attacks. Over 99% of respondents had access to electricity, including 100% in Kharkiv. Fewer than 7% had lost access to gas. Over 90% had internet access and over 98% had mobile phone service. Over 80% of residents of Lviv, Kyiv, Dnipro, and Kharkiv reported that they had access to safe drinking water, although only 26% of Mykolayiv inhabitants said the same. The figure for Kharkiv, Ukraine’s second-largest city, is remarkable. Russian forces remained within artillery range of Kharkiv until September and have constantly attacked it with artillery shells, multiple-launch rocket systems, and long-range precision munitions since February. Russian attacks regularly damage key infrastructure nodes especially in frontline cities, but Ukrainians are managing to repair and keep their systems operating remarkably well despite these attacks.

The most important and promising fact emerging from this survey is that Ukrainians are doing this. The international aid and donor communities are providing aid now and studying Ukraine’s needs in preparation to help with post-war reconstruction but have not taken over operation or repair of major infrastructure. Ukrainians are doing that for the most part by themselves.

Ukrainians expect to keep doing it themselves, moreover, empowered by the international community but not replaced by it. Asked whether their own local or national government, their own civil society, or international organizations should be responsible for reconstruction large majorities preferred Ukrainian local or national government. That finding is remarkable considering the apparently waning trust in governmental institutions that had characterized pre-war Ukraine. It suggests that Ukrainians want to rebuild a self-sufficient functioning state and do not want to become wards of the international community. It suggests that they want to believe that their government can serve them despite its present and historical challenges and limitations.

Ukraine’s challenges remain immense and must be confronted with clear eyes and no illusions. The indications that Ukrainians want their government to work do not mean that it can or will, or even that they think it will. Unemployment remains far too high, and Ukraine will require large infusions of cash and reconstruction aid in the coming months and years to rebuild what the Russians have destroyed. Success is by no means guaranteed.

But there is reason for hope in a very dark time. Ukrainians have fought the Russian army and are driving it back with Western weapons and cash, but no Western soldiers. They are keeping their economy alive with Western money but their own expertise and ingenuity. Ukraine has shown in this terrible trial by fire its determination to make itself free and functional. That is an effort worth investing in.

[1] According to an annual study conducted by Kyiv International Institute of Sociology, trust in local and national government increased from 15% in August 2021 to 82% in August 2022. Kyiv International Institute of Sociology. Opportunities and Challenges Facing Ukraine’s Democratic Transition. Nationwide Survey. July 1-August 3, 2021. https://www.ndi.org/sites/default/files/July%202021%20_bi-annual%20survey%20-%20public.pd