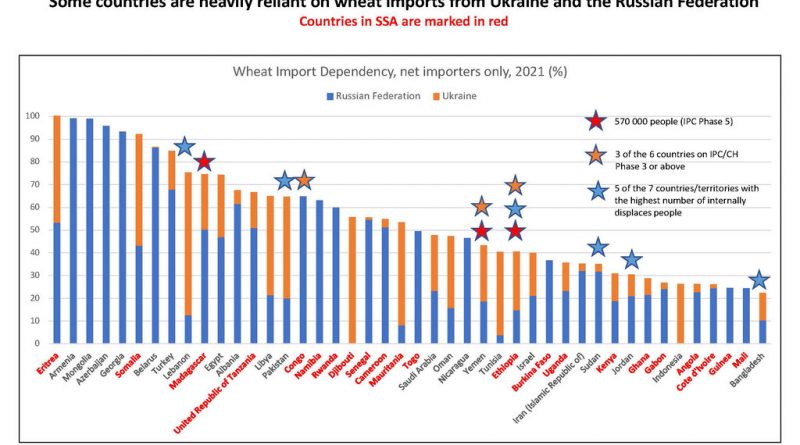 Under the theme Securing Global Food Security in Times of Crisis, QU Dongyu, Food and Agriculture Organization (FAO) Director-General, told agriculture ministers from G7 wealthy nations gathered in Stuttgart, Germany, that the most significant threats stem from conflict, and the associated humanitarian impact, together with multiple overlapping crises.

In my address to #G7 agriculture ministers I stressed the need to support the continuity of farming & agrifood chains in Ukraine. I commended the group for its coordinated & timely action. We must ensure that measures taken to address the crisis do no exacerbate food insecurity. https://t.co/JCPfv7LIzG

“Crisis represents a challenge for food security for many countries, and especially for low‑income food import dependent countries and vulnerable population groups,” he said.

Based on the Global Food Crises Report released on 4 May, last year around 193 million people in 53 countries/territories were officially in the Crisis phase, or worse (IPC/CH Phase 3 or above).

Other 2021 data revealed that 570,000 people in four countries were in the category of Catastrophe phase (IPC/CH Phase 5).

Wheat, maize, and oilseed prices have surged in particular.

At 160 points, the FAO Food Price Index reached its highest level ever in March, averaged 158.2 points in April and remains today at a historical high.

Mr. Qu said FAO’s proposed Food Import Financing Facility would be an important tool for easing the burden of rising food import and input costs, potentially benefitting 1.8 billion people, across 61 of the most vulnerable countries.

Since the start of the conflict in February, export forecasts for Ukraine and Russia have been revised down as other market players, notably India and the European Union, have increased exports.

“This partly compensated for the exports ‘lost’ from the Black Sea region, leaving a relatively modest gap of about three million tonnes,” said the FAO chief.

He observed that wheat export prices surged in March, continued to edge upwards in April, and will likely “remain elevated in the coming months”.

He also called on governments to “refrain from imposing export restrictions, which can exacerbate food price increases and undermine trust in global markets”.

Turkey, Egypt, Eritrea, Somalia, Madagascar, Tanzania, Congo, Namibia and other countries dependent upon Ukraine and Russia for wheat have been greatly impacted.

Mr. Qu said that these States need to identify new suppliers, “which could pose a significant challenge, at least in the next six months”.

At the same time – with levels ranging from 20 to more than 70 per cent – Brazil, Argentina, Bangladesh, and other nations, are reliant on Russian fertilizer for their crops.

While Africa overall accounts for only three to four per cent of global fertilizer consumption, Cameroon, Ghana and Ivory Coast are amongst the most vulnerable countries, relying heavily on Russian supplies.

“We need to assure that key food exporting countries have access to the needed fertilizers to assure sufficient food availability for the next year,” said the top FAO official, encouraging all countries to improve fertilizer efficiency, including through soil maps and improved application.

To support farmers’ access to crop and livestock in the immediate and medium‑term, FAO has developed a Rapid Response Plan for Ukraine, which outlines three key actions.

The first is to maintain food production through cash and inputs for cereal crops in October, vegetable and potato production in the spring, and harvest support in July and August, for the upcoming winter crop.

And finally, it stresses the importance of ensuring accurate analyses of food security conditions and needs as they evolve.

“Coordinated action for Ukraine within this group is indispensable to facilitate the smooth functioning of global food markets and thus to secure food supply for all,” said the Director-General

“FAO stresses the need to support the continuity of farming operations within Ukraine; while supporting agrifood value chains”.