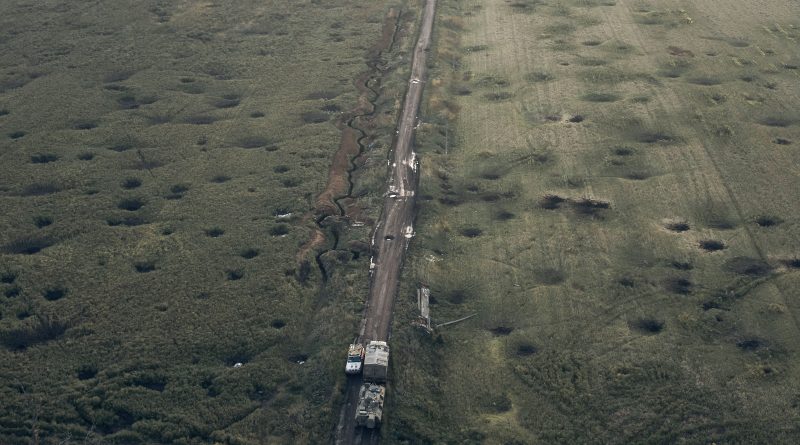 
Reports of a terrible odor and polluted water near the city of Brovary, 12 miles northeast of Kyiv, started making their way to Ukrainian environmental regulators this summer. Olena Sydorenko, an official at a regional environmental agency, was sent to investigate. Back in early March, Russian rockets had destroyed a large, frozen-food warehouse as the invasion force moved in to occupy the area. As huge quantities of butter, meat, and vegetables began to spoil, local residents did their best to deal with the waste, burying the food in dozens of nearly 600 ft.-long trenches in a nearby field.

Sydorenko arrived three months later, after Ukrainian forces recaptured the region. She conducted tests of the local groundwater, and found that the rotten food had been leaching nitrates and ammonia into the groundwater, poisoning local wells. The smell, she says, was indescribable.

“You can imagine how horrible the odor was if you, for example, forgot some food in your kitchen and came back after a while,” she says. “The odor at the site was much worse.”

Ukraine has endured almost unfathomable damage during the war with Russia. More than 6,000 civilians have been killed, while thousands of homes and apartment blocks have been shelled, and billions of dollars worth of infrastructure has been turned into charred and mangled wrecks. The environment has also been a casualty of the war, in ways that have affected both human health and local ecosystems. Massive forest fires spread as the fighting raged, while attacks on fuel and industrial facilities caused chemicals to leach into rivers and groundwater. “Before the war, we never found such high levels of oil products in the soil and water,” Sydorenko says. “We have never seen such pollution.”

Sydorenko’s work is part of a long-shot legal strategy on the part of Ukraine’s environmental ministry that aims to use international law to force Russia to pay for that damage after the war. Such fillings for environmental crimes have been relatively rare over the decades, though there is precedent. Following the Gulf War in the early 1990s, the U.N. Security Council voted to force Iraq to pay reparations to Kuwait, “including environmental damage,” which ultimately amounted to about $3 billion of Iraq’s $52 billion post-war financial obligation. (Iraq finished paying off the debt this February.) Ukraine’s claim, which the country plans to file in international court after the end of the war, will likely be far larger—rebuilding the country will cost nearly $350 billion, according to a report from the World Bank, the Ukrainian Government, and the EU Commission. Any effort to get Russia to actually pay the reparations, such as by seizing Russian assets held overseas, will face a complicated set of legal and diplomatic hurdles. But Ukrainian officials carrying out the strategy are confident their country will ultimately get its due. “The day will come when Russia will pay for all its crimes,” says Ruslan Strilents, head of Ukraine’s national environmental ministry, “including crimes against the environment.”

Strilents began mobilizing his agency when the war began in February, gathering his employees at the agency offices in Kyiv in the first hours after fighting started. Working during wartime was going to put unprecedented demands on them, he said, and he asked who would be willing to work essentially nonstop, without breaks or weekends, and be available 24 hours a day, seven days a week. The majority said they would do it. “I discovered the other side of a lot of people,” he says. “I will never forget it.”

A field is covered with craters left by the shelling close to Izium, Kharkiv region, Ukraine, Tuesday, Sept. 13, 2022.

The environmental ministry soon set up camps on government land for those fleeing to safety, and sought ways to recycle and dispose of military waste. “We are not a military ministry,” Strilents says. “But our task [now] is to help the government to fight against Russian aggression.”

Staff at the environmental inspectorate—a subdivision of the nation’s environmental ministry—also began collecting evidence of environmental damage caused by the war, taking samples from fuel depots destroyed by Russian attacks, agricultural fields contaminated by gasoline, and rivers where fish have suffocated under oil slicks. Few of them ever imagined they would be doing this sort of work. Before the invasion, the inspectorate was primarily tasked with ensuring that local government agencies were complying with national environmental rules. Now, its staff members have essentially become war-crimes investigators in their own country.

Dmytro Zaruba, the head of the national environmental inspectorate, joined one of the ministry’s earliest inspections in March, at the site of a Russian attack near Lviv in western Ukraine, where gleaming white tanks of an oil depot had been reduced to charred rubble. Craters nearly 30 ft. deep scarred the ground, and parts of Russian missiles were strewn through the wreckage. Blackened remains of trees surrounded the site, and oil from the destroyed tanks had leached into nearby rivers, killing fish and other wildlife. “It wasn’t the first time I had seen environmental pollution,” says Zaruba. “But it was a totally different emotion for me. It was disturbing to understand that this might happen again and again.”

By the end of September, environmental ministry staff had made more than 200 visits to sites of Russian attacks. Sydorenko visited a destroyed oil depot in April, then returned to the same site in July; oil spilled on a nearby agricultural field had left the land completely bare of vegetation, even after a three month gap. Serhii Trofanchuk, who leads one of the ministry’s regional water resource divisions in eastern Ukraine, says his staff has continued to take samples from local rivers, logging evidence of pollution from pesticides, oil products, mercury, nitrates, and phosphates. Russian strikes on water management facilities have contributed to that pollution, while attacks against dams and other infrastructure along the Siverskyi Donets river, the primary water source for more than 3 million people in the region, have caused water levels to drop, preventing river flows from clearing the chemicals. “The river cannot clean itself, as it was doing before the war,” Trofanchuk says.

The ministry’s staff can’t be everywhere, though. Two months after the Russian invasion, the agency released an app enabling civilians to submit photos and other potential evidence of harm done to the environment, which staff could then try to corroborate. More than 2,000 such incidents have been logged as of mid-October. Satellite imagery from Ukraine’s space agency also helps track damage in places inspectors can’t get to due to ongoing fighting—NASA and the European Space Agency have also agreed to provide satellite data to help assess environmental damage.

Many staffers at Ukraine’s environmental ministry say they have been stunned by the scale of the environmental damage they have seen. “Before the invasion, we didn’t like when people burned leaves in the fall, because it pollutes the environment,” says Sydorenko. “You can imagine how small that is in comparison with fires at oil depots.”

Documenting the war’s environmental destruction is one thing; calculating the monetary value of that damage so Ukraine can actually hold Russia accountable is another. Mark Zheleznyak, an expert in environmental modeling, renowned for his work in the aftermath of the Chernobyl nuclear disaster, was enlisted by the Ukrainian government to help. Throughout April and May, he assembled more than 80 volunteer scientists, lawyers, and economists to develop methods to translate the environmental damage into economic terms.

One of his expert subgroups is responsible for figuring out a method to calculate the costs of air pollution caused by the war. That includes putting a price on greenhouse gasses released from dozens of oil depot attacks and forest fires over tens of thousands of acres set off by the fighting. The group must also figure out how air pollutants may have affected human health, explains Mykhailo Savenets, a meteorologist at the Ukrainian Hydrometeorological Institute who leads the group. “This,” he says, “is the most difficult part.”

Some of those emissions have been extremely dangerous—a Russian attack on an industrial facility in eastern Ukraine in April, for instance, released a cloud of dangerous, highly corrosive nitric acid—but health effects among civilians have gone largely unreported due to ongoing fighting. Savenets and other scientists have created probabilistic methods to come up with an estimate of the damages, identifying the health risks of certain pollutants, like ammonia released from chemical facilities—which can cause lung damage and blindness—alongside the size of the population potentially impacted, and the cost of the health issues likely to follow.

Developing those methodologies, intended to stand up in international court, takes time. For now, Zheleznyak says, the important part of the ministry’s work is collecting the actual information on the ground, which they will need to back up their claims in court. “The data is, in some sense, more important than the methodologies,” says Zheleznyak.

Indeed, even the best methodologies won’t account for everything. For instance, the damage exacted on Ukraine’s natural places are hard to put into monetary terms. “Imagine that something happened to Niagara Falls in the U.S., and you had to calculate its value,” says Zaruba. “It’s impossible.” There’s also the incalculable cost of decades of lost environmental progress. During a video call with TIME, Trofanchuk held up a pre-war plan for a system of improvements along the Siverskyi Donets river basin, including new water purification facilities. Now, he says, they will have to focus on repairing facilities damaged in the fighting, instead of building the new infrastructure they had planned. Still, he says he hopes that the region will rebuild better than before. Others are more bitter. “Our role was to prevent pollution and preserve the environment for the future generations,” says Sydorenko. “But what happened happened, and now our work has changed.”