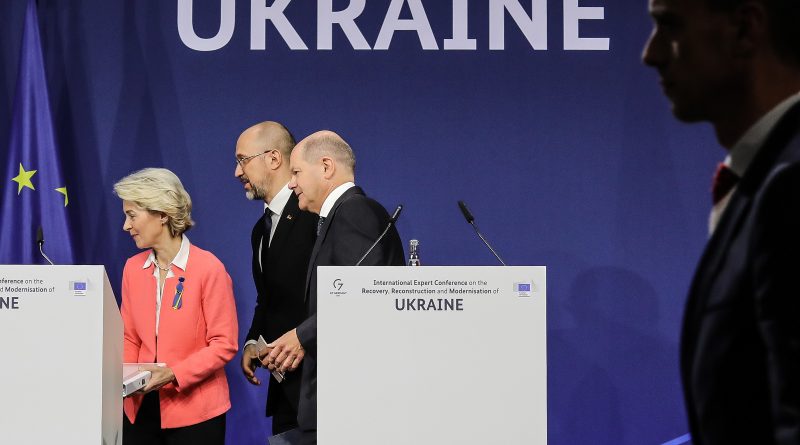 
As Russia deploys kamikaze drones against Ukraine, decimating much of the country’s energy infrastructure ahead of a tough winter, E.U. officials are focused on helping the country rebuild.

The World Bank estimates that the war in Ukraine will cost nearly $350 billion in reconstruction. While an end to the war is not yet in sight, Ukrainian president Volodymyr Zelensky has called for the seizure of Russian assets to be a part of funding Ukraine’s reconstruction efforts—although E.U. officials and experts have urged caution in how to do so legally, safely, and without unleashing chaos in global markets.

They have also suggested that efforts to hold Russia financially accountable must be accompanied by a steady reliance on bilateral donors such as the U.S. and E.U. nations, as well as international financial institutions such as the International Monetary Fund.

“You cannot count on that money right now to pay for reconstruction and recovery, but it has to be part of the longer-term solution,” says Jonathan Katz, senior fellow with the German Marshall Fund of the United States, a nonpartisan American public policy think tank focused on transatlantic issues. “Funding is still needed from key allies and partners.”

Read more: Europe’s Energy Crisis Is Going to Get Worse. The World Will Bear the Cost

On Tuesday, E.U. leaders facilitated a meeting to work on what German chancellor Olaf Scholz, who hosted the conference in Berlin, described as a “new Marshall Plan” to rebuild Ukraine.

The original U.S.-backed Marshall Plan was a post-World War II effort to revitalize the economies of its European allies. Between 1948 and 1952, the U.S. contributed $13.3 billion spread across the continent to boost economic output. The plan aimed to cement strong economic and political relationships with the countries in an effort to keep them from falling under Soviet and communist influence.

One of the current plan’s key goals is the eventual economic and political integration of Ukraine into the E.U. “The path to reconstruction is also Ukraine’s path into the European Union,” Scholz and European Commission President Ursula von der Leyen wrote in German newspaper FAZ on Sunday. (In June, the E.U. gave Ukraine candidate status.)

At Tuesday’s event, officials and experts emphasized the need for long-term assistance and more urgent rehabilitation. Zelensky said in a video addressing the conference that Russian attacks had destroyed more than one third of the country’s energy infrastructure—making it harder to cope with the oncoming winter and work toward reviving the economy.

Both Zelensky and Polish Prime Minister Mateusz Morwiecki called for seizing Russian assets. “There is a huge pot of gold to be taken and dedicated for Ukraine’s reconstruction, which is Russian assets—assets of the Russian Federation and Russian oligarchs,” Morawiecki said. “Freezing means really not too much. … They have to be confiscated.”

President of the European Commission Ursula Von der Leyen has been supportive of calls to hold Russia financially accountable, but also expressed caution around ensuring a legally sound process. “The will is there, but legally it is not trivial; there’s a lot of work still in it,” she said.

The U.S. and several E.U. nations have already frozen billions of dollars in assets belonging to Russian oligarchs. But going a step further and seizing strategic state assets would escalate the conflict. “For Russia, that will be a red line. That’s not to say we should not do it under any circumstances, but we cannot be naive and go forward thinking that the Russians will accept this without consequences. They won’t,” says Benn Steil, senior fellow and director of international economics at the Council on Foreign Relations.

Kenneth Rogoff, chair of international economics at Harvard University and former chief economist at the IMF, also warns against the dangers of seizing Russian assets. “This would be just but very difficult to do given the damage Russia can unleash,” Rogoff said. “Even if Russia is totally defeated on the battlefield in Ukraine, it remains a nuclear power and the west will be looking for ways to reach stable peace.”

A utility worker stands near a truck crane which lifts an old pipe on Sept. 9, 2022 in Kharkiv, Ukraine. City authorities organized the replacement of heating pipes to reduce heat loss in the Saltivka district, despite daily shelling by Russian troops.

Read more: What the West Should Do If Putin Uses a Nuclear Weapon

Moreover, tampering with Russia’s foreign exchange reserves could harm global trust in the stability of the U.S. dollar. “We would be sending a message to the entire world that dollar-denominated assets are not safe,” Steil says. “If you cross the United States, they will find a pretext to take your money … And that would be a major change in post-war practice.”

Relying on Russia to fund a large part of the reconstruction effort may prove to be difficult, so U.S. and European allies should work to create a more sustainable source of support, says Katz, with the German Marshall Fund: “The most important thing is steady, predictable macroeconomic funding.” Ukraine also needs to take steps to ensure transparency and anti-corruption measures, he adds. “These are all prerequisites to becoming an E.U. member state but it’s also a prerequisite for donors and funders–including the U.S., the IMF, the World Bank–to go ahead and implement a long-term project like a modern Marshall Plan for Ukraine.”

Some experts maintain that while reconstruction efforts are important, the political integration goals of the “new Marshall Plan” will fall flat. “There is little that the West can do on a practical basis to provide for Ukraine’s long-term security that would make a Marshall Plan possible,” says Steil, who authored a May 2022 Foreign Affairs piece, titled No Marshall Plan for Ukraine.

In the piece, Steil argued that while Ukraine appeared to be a perfect candidate for a Marshall plan given its democratic roots and desire to integrate with the west, its geography—the fact that it borders Russia—made it unlikely to succeed.

“Without Russian cooperation or at least committed noninterference—a noninterference that is inconceivable currently or in the foreseeable future—the robust and enduring revival experienced by the Marshall countries is simply beyond Ukraine’s reach,” Steil wrote.