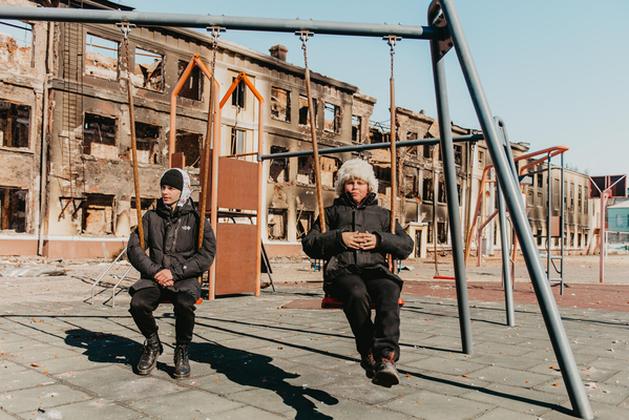 NEW YORK, Jun 01 (IPS) – Conflict has taken a horrific toll on civilians in Ukraine over the past three months with many families struggling to meet even their most basic needs, including education. Over 1,600 schools and universities have been damaged or destroyed since Russia’s invasion on February 24, according to Ukraine’s Education Ministry. Armed forces on both sides have reportedly bombed schools or used them as bases or for storing weapons.

In just one example, a Russian airstrike reportedly hit a school on May 8 in Luhansk, on the front lines in eastern Ukraine, injuring or killing dozens of civilians who had sheltered there.

Education is fundamental for students during war. Beyond teaching, schools and universities can provide a safe space, give students routine, and connect them to life-saving resources such as meals and mental health services.

Fortunately, 3.7 million Ukrainian children have been able to access online and distance learning since February despite school closures. This has reduced gaps in instruction and, perhaps more critically, maintained a sense of normalcy.

Yet, the war’s longer-term impact on the quality of and access to education remain worrisome. Repairing schools will require significant time and resources, and many students and teachers will experience stress and trauma that affect learning and teaching. That is, if they return to class at all – children in conflict- and crisis-affected areas are twice as likely to be out of school as those in other places.

Unfortunately, Ukraine is not alone. Education is under attack around the globe, and armed violence against students, teachers, and education facilities is on the rise. In fact, we found in research for our new report an average of six attacks on education each day in 2020 and 2021. In all, we identified more than 5,000 cases of attacks or military occupation of schools during that two-year period.

These attacks harmed, injured, or killed over 9,000 students, teachers, and academics. Nine countries each had more than 400 attacks or over 400 students or educators harmed. Attacks increased in Mali, Myanmar, and Colombia compared to the previous two years, but decreased in countries such as Syria and Yemen, where conflict de-escalated. Shelling and rifle fire damaged dozens of schools in Ukraine in 2020 and 2021, in the eastern Donbas region where conflict began half a decade before.

Explosive weapons, which were involved in one-fifth of all reported attacks on education globally and were used in many of the attacks in Ukraine, had particularly devastating effects. Airstrikes, shelling, and other explosives are especially dangerous because they produce a large blast that can propel bomb fragments a great distance, in all directions, often indiscriminately harming civilians and civilian buildings.

There are several key steps that can be taken to protect education in Ukraine and elsewhere.

First, allies of the warring parties mustneed to press them to stop attacking schools or using explosive weapons with wide-area effects near schools or universities. Warring parties should also avoid occupying schools and universities and using them for military purposes. Occupation damages schools and universities and puts students and educators at risk, but it may also place the educational facilities in the crosshairs of enemy forces.

Second, governments should endorse and implement the Safe Schools Declaration, an intergovernmental political commitment to protect students, teachers, schools, and universities in armed conflict. Though Russia has not endorsed the declaration, Ukraine did in 2019. It has taken important steps to fulfil Declaration commitments in the midst of conflict, such as instituting remote learning and collecting data on attacks on education facilities.

Third, the attackers need to be held to account. Governments, the United Nations, and national and international organizations should support efforts to collect reliable evidence of attacks on schools and universities, and their students and staff, and to put those responsible on trial in fair national or international courts, as well as to provide assistance to victims of attacks.

Finally, funding must be raised and –crucially– directed toward rebuilding schools and universities destroyed in attacks as soon as it is safe. Education is chronically underfunded in humanitarian response. However, donors and governments can ensure funds are directed toward rebuilding classrooms, playgrounds, and libraries, since distance learning, while exceptionally important, is no long-term substitute for quality in-person education.

Destroyed and occupied schools and universities not only upend learning, they also jeopardize the post-conflict rebuilding of communities and economies. Education needs to be safeguarded in Ukraine and globally.

Jerome Marston and Marika Tsolakis are senior researchers at the Global Coalition to Protect Education from Attack, an inter-agency coalition formed in 2010 to address the problem of targeted attacks on education during armed conflict.