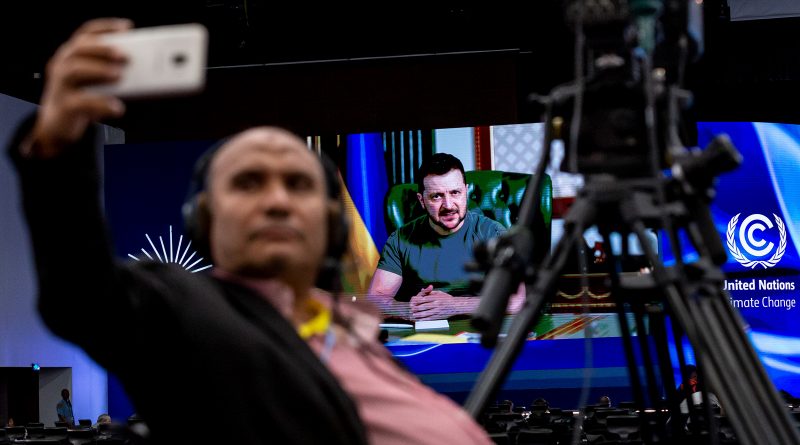 
In one sense, Ukraine’s delegation to the COP27 climate conference in Sharm El-Sheikh, Egypt, has a complicated task: to convey to the world the interconnections of war and climate change, the scale of the environmental destruction that Russia’s invasion has unleashed, and the determinedness of this nation of 44 million to carry out its decarbonization goals anyway‚ building back greener than before. In another view, the delegation’s objective is simple: to remind the world—nine months after their country was invaded—that they still exist.

“People around the world are just a little bit tired of Ukraine,” says Yaroslava Gres, co-founder of a Ukrainian public relations agency, Gres Todorchuk, which came up with the concept for the country’s COP27 pavilion. “We were trying to find an idea of how to fight again for this attention for the war that is completely destroying our country, and at the same time to be on the same page as the global community, which has come to Egypt to discuss climate, environmental problems, and so on.”

That effort is being directed particularly at delegates and officials from nations that have expressed ambivalence about Russia’s invasion. The COP27 conference comes one month after the U.N. general assembly voted on a resolution condemning Russia’s illegal annexation of parts of eastern Ukraine. The measure passed by a huge majority. 143 countries, including Egypt, voted in favor, with only five opposed—Belarus, North Korea, Syria, Nicaragua, and Russia. But 35 countries sat out the vote, refusing either to castigate Russia, or to defend it. China and India were among that group. African nations, including Algeria, Ethiopia, and Tanzania, account for more than a dozen others. Ruslan Strilets, Ukraine’s environmental minister, says that the conference’s location this year represents a unique opportunity to reach powerful people in those nations.

“Our goal is to [show] these countries that Ukraine is in the right, compared to Russia,” says Strilets, “not only for 147 countries to vote to condemn Russia’s act, but for all the countries to adopt the decision that Russia’s acts are against the agreements of the United Nations.”

A cameraman takes a selfie as Ukrainian President Volodymyr Zelensky delivers his statement via video on the third day of the COP27 U.N. Climate Change Conference in Sharm el-Sheikh, Egypt on Nov. 8.

It’s unclear when nations will next be forced to take sides—there were only slight differences between the voting outcomes in the Oct. 12 referendum and an early March U.N. vote to condemn the invasion itself. But in general, the more nations Ukraine can get to side against Russia’s actions, the more hollow the country’s claims that its war is legitimate sound.

In a compelling Nov. 8 virtual address to the climate conference, Ukrainian President Volodymyr Zelenskiy argued that it was not possible to address climate change without first ending the war in Ukraine. “There can be no effective climate policy without peace on the Earth,” he said, “because in fact nations are thinking only about how to protect themselves here and now from the threats created in particular by the Russian aggression.”

Gres and her colleagues’ job was to help make this case to visitors passing by the country’s COP27 pavilion, a designated space in the Sharm El-Sheikh conference area that functions like a booth at a trade show for countries to show off their environmental plans. Ukraine’s space was about the size of three shipping containers lined up side to side, and Gres’s firm decided to occupy it with a walk-in hollow V-shaped structure, like a giant grey traffic cone standing on its tip, intended to evoke a missile crater. “Ukraine now is full of these craters, in every field, in the centers of cities, you can see them everywhere,” says Gres. “So we decided to put it at the center of our story.”

A tree trunk riddled with shell fragments, brought to Egypt from Ukraine, is also on display, along with hundreds of samples of Ukrainian soils, intended to highlight the connections between the war and risks to the global food supply. “It’s the main goal of our pavilion [for visitors to] see with their own eyes how this war is destroying Ukraine’s environment, and Ukraine’s infrastructure, and all other aspects of our lives,” says Strilets. “To feel the situation we have here in Ukraine.”

Adds Gres: “I hope we change their minds.”