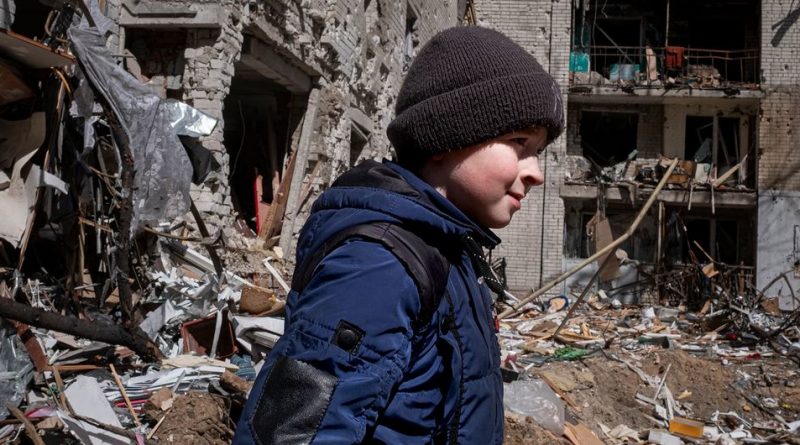 
Highlighting the devastating and lasting consequences of the war on millions of the country’s youngsters, UN Children’s Fund UNICEF, maintained that most of the victims were from “attacks using explosive weapons in populated areas”, a claim supported by the UN human rights office, OHCHR.

“1 June is International Day for the Protection of Children in #Ukraine & across the region. Instead of celebrating the occasion, we are solemnly approaching June 3 – the 100th day of a #war that has shattered the lives of millions of children”, – @unicefchiefpic.twitter.com/aT19JLi4V0

“June 1 is the International Day for Protection of Children in Ukraine and across the region,” saidUNICEF Executive Director Catherine Russell. “Instead of celebrating the occasion, we are solemnly approaching June 3 – the 100th day of a war that has shattered the lives of millions of children. Without an urgent ceasefire and negotiated peace, children will continue to suffer – and fallout from the war will impact vulnerable children around the world.”

The scale and speed of the emergency in Ukraine have not been seen since World War Two, the UN agency said in a statement, which estimated that 5.2 million children there, now need humanitarian assistance; three million inside the country and more than 2.2 million in refugee-hosting countries.

As intense artillery exchanges continue between Russian and Ukrainian forces in eastern Donetsk region and amid reports that Russian troops now control much of the city of Sievierodonetsk, UNICEF said that almost two in three children in Ukraine have been displaced by fighting.

“Civilian infrastructure on which children depend continues to be damaged or destroyed,” the agency explained. “This so far includes at least 256 health facilities and one in six UNICEF-supported ‘Safe Schools’ in the country’s east. Hundreds of other schools across the country have also been damaged. Conditions for children in eastern and southern Ukraine where fighting has intensified are increasingly desperate.”

In addition to the trauma of fleeing their homes, UNICEF underscored that children fleeing violence faced a significant risk of family separation, abuse, sexual exploitation and trafficking.

The long-lasting mental health toll of the war on youngsters has also contributed to an acute child protection crisis, made worse by the fact that many displaced families are out of work and unable to meet their children’s basic needs.

“These children urgently need safety, stability, child protection services, and psychosocial support – especially those who are unaccompanied or have been separated from their families. More than anything, they need peace,” UNICEF insisted, in a renewed call for a ceasefire after 99 days of fighting.

The UN agency also reiterated its call for “full humanitarian access” so that teams can “safely and quickly reach children in need wherever they may be”.

Inside Ukraine, UNICEF and partners have already distributed life-saving health and medical supplies for nearly 2.1 million people in war-affected areas.

Equally important, critical safe water access has also been secured for more than 2.1 million people living in areas where networks have been damaged or destroyed.

Over 610,000 children and caregivers have also received mental health and psychosocial support, while nearly 290,000 children have been given learning supplies.

In addition, almost 300,000 vulnerable families have registered for a humanitarian cash assistance programme run by UNICEF and the Ukrainian Ministry of Social Policy.

In countries hosting Ukrainian refugees, the UN agency continues to look out for the most vulnerable youngsters by providing anti-trafficking training for border guards and encouraging local authorities to integrate refugee children into schools.

Providing vaccines and medical supplies for displaced Ukrainians is a key component of UNICEF’s response, and so too is establishing play and learning hubs to provide young children with a much-needed sense of normalcy and respite.

In total, 25 UNICEF-UNHCR “Blue Dots” – one-stop safe havens that provide support and services for families on the move, have been established along major transit routes in Moldova, Romania, Poland, Italy, Bulgaria and Slovakia, the agency said.