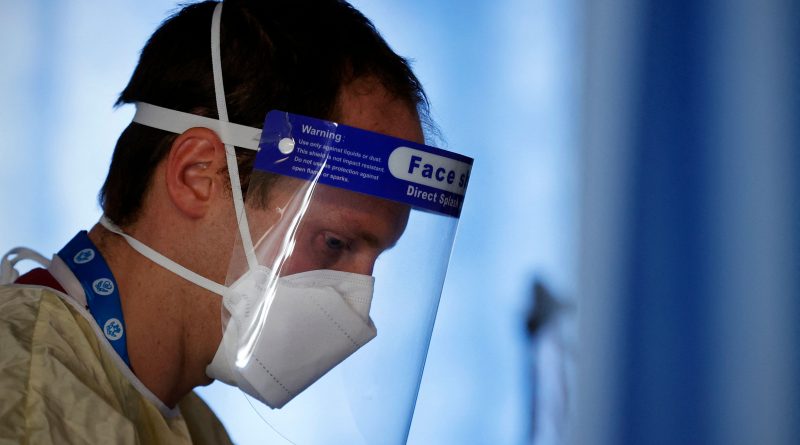 LONDON — U.K. medical professionals have issued an urgent plea to the British government to reimpose some Covid restrictions due to the increased level of infections and hospitalizations in the country.

Health leaders warned late Tuesday that the U.K. risks “stumbling into a winter crisis” if the government does not enact its “Plan B,” a pledge it made last month in which it said it would reimpose Covid measures if data suggested the National Health Service was “likely to come under unsustainable pressure.”

Officials at the NHS Confederation, which represents organizations across the U.K. healthcare sector, issued a statement calling on the government “to introduce measures, such as mandatory face coverings in crowded and enclosed spaces, without delay to keep people well and avoid the NHS from becoming overwhelmed this winter.”

They warned that the National Health Service “is seeing worrying increases in coronavirus cases in its hospitals and the community at a time when it is preparing for a busy winter period, its staff are close to burnout, and it is being expected to recover many of its services that were disrupted by the pandemic.”

The U.K. is currently recording between 40,000 and 50,000 new Covid cases a day and the number of hospitalizations and deaths is steadily rising, although at a much lower pace than earlier in the pandemic thanks to Covid vaccines, which greatly reduce the risk of severe infection, hospitalization and death.

On Tuesday, the U.K. reported 43,738 new Covid cases, a decrease from Monday when 49,156 new cases were recorded, which marked the highest daily number in three months.

Situation ‘will only get worse’

Covid restrictions in England were lifted on July 19 when pubs, restaurants and nightclubs reopened. Mask-wearing also became largely a matter of personal choice apart from on public transport.

The government, under Prime Minister Boris Johnson, has previously insisted that Covid restrictions, and potential lockdowns, would only return as a last resort and that the country must “learn to live with the virus.”

On Wednesday, the U.K.’s Business Secretary Kwasi Kwarteng reiterated that position, saying: “I absolutely think that it would be completely wrong for us to go back into a lockdown,” he told Times Radio.

Noting that hospitalizations and death rates were much lower than in previous peaks of the pandemic, he added that “we are learning, I think, to live with the virus.”

The NHS Confederation on Tuesday said the additional measures that the U.K. could now enact included “clear communications to the public that the level of risk has increased, introducing certificates for people’s Covid vaccine status, and legally mandating people to wear face coverings in certain settings, in addition to considering asking people to work from home if they can.”

Many of these measures, particularly around mask-wearing and Covid certification, “are already common in parts of Europe where the prevalence of the disease is lower,” the NHS Confederation noted.

Speaking on Wednesday morning, Matthew Taylor, chief executive of the confederation, warned that the NHS, a much-loved institution in the U.K. and even more so during the pandemic, was “right on the edge” with the number of Covid patients seen to be rising in hospitals.

“I talk to health leaders every day, and I have literally not spoken to any leader who doesn’t say that their service is under intense pressure now. This is the middle of October. Things are only going to get worse,” he told BBC Radio.

“The health service is right at the edge … if you push much further we will not be able to provide the level of service that people need to have.”

Making matters worse, potentially, is a new mutation of the delta variant that British experts are watching closely.

Last Friday, the U.K.’s Health Security Agency issued a report in which it said “a delta sublineage newly designated as AY.4.2 is noted to be expanding in England” and that it was monitoring the subtype.

The highly infectious delta variant is the dominant version of the coronavirus worldwide, having usurped the previous “alpha” variant of the virus, that was first discovered in the U.K.

This new descendent of the delta Covid variant, AY.4.2, has being identified in an increasing number of U.K. Covid cases, with some suggesting it might be another possible factor in rising case numbers, although it is too early to tell for sure.

“This sublineage is currently increasing in frequency. It includes spike mutations A222V and Y145H. In the week beginning 27 September 2021 (the last week with complete sequencing data), this sublineage accounted for approximately 6% of all sequences generated, on an increasing trajectory. This estimate may be imprecise … Further assessment is underway,” the U.K. Health Security Agency noted.

The prime minister’s official spokesman told Sky News on Tuesday that “[AY.4.2] is something we’re keeping a very close eye on” and that there’s currently no evidence to suggest that this variant is more easily spread. “There’s no evidence for that, but as you would expect, we’re monitoring it closely and won’t hesitate to take action if necessary,” he said.

“U.K. reported its biggest one-day Covid case increase in 3 months just as the new delta variant AY.4 with the S:Y145H mutation in the spike reaches 8% of UK sequenced cases,” Gottlieb said. “We need urgent research to figure out if this delta plus is more transmissible, has partial immune evasion?”

Professor of immunology at Imperial College London, Danny Altmann, told CNBC Monday that the subtype “needs to be monitored and, so far as possible, carefully controlled.”

“Because delta has now been the dominant mutant in several regions for some six months and not been displaced by any other variants, the hope has been that delta perhaps represented [the] peak mutation performance achievable by the virus. AY.4 may be starting to raise doubts about this assertion,” he warned.

Why is the UK in this mess?

Experts say there are a variety of reasons for the U.K.’s steep Covid numbers — ranging from the half-hearted mask adoption (even when masks are required, such as on public transport, the rule is rarely enforced) to large indoor gatherings that have allowed the virus to spread.

The U.K.’s hesitation in vaccinating younger teenagers, something that other countries in Europe and the U.S. did much earlier, and the return to schools in September, have also been cited as reasons for the sharp rise in cases. Although the boom in infections among 0-18 year olds is now ebbing as infections rise in their parents’ generation, data shows.

Ironically, the U.K.’s early vaccination rollout — which began in December 2020 and was one of the first in the world — is also seen as contributing to its high case rate now because we know — due to an increasing body of data — that immunity in vaccinated people wanes after about six months. To date, 78.9% of the U.K. population over the age of 12 is fully vaccinated, official data shows.