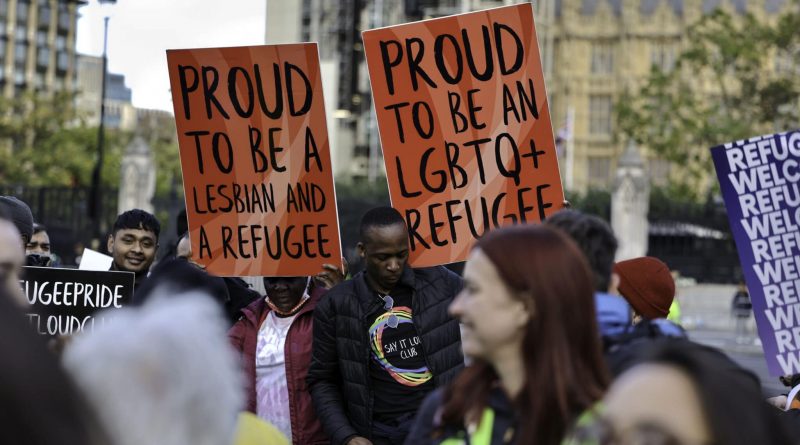 A demonstration was held at Parliament Square to stand in solidarity with refugees in Britain to protest against the Nationality and Border Bill which is under review by committees at the House of Commons. (Hesther Ng/SOPA Images/LightRocket via Getty Images)

Priti Patel’s “anti-refugee” borders bill would “slam the door” on LGBT+ asylum seekers and leave them vulnerable to exploitation and human trafficking, it has been warned.

Ernest was looking down at his feet in a jail cell in Cameroon when a prison guard called him over. His mother was here. It was time to go.

Throughout his 18 years he’d lived a cookie-cutter life. The first son of a nuclear family, he went to a Christian boarding school and was being prepped to someday take over the family business. Then his family found out he was gay.

The father of his high-school sweetheart, Patrick, came over to his home and beat him senselessly on Valentine’s Day. The police tortured and starved him, and local witch doctors thought he was possessed by demons after his family rejected him.

Ernest is now a 32-year-old living in Britain, one of the approximately 2,000 LGBT+ people who claim asylum each year fearing persecution in their home country, according to statistics from the Home Office.

He speaks with a hushed voice and seems hesitant to take up space, to be heard. He has scars that pattern his body, an enduring reminder of what he experienced in Cameroon. He was tired when we spoke.

“I went unconscious and woke up in a police station,” he continued, “where I was detained for seven days. For three days I had no food or water, I was tortured, I was stripped naked. I was spat on, kicked, I was beaten, I was called a witch. I was stabbed on my right leg.

“My dad gave up on me. He visited the station, looked at me, didn’t say a word and he left me there. My mum came on the seventh day and she had to bribe the police officers, that’s how I was released. I was told I was a disgrace.”

Kicked out of the family home, he lived in Cameroon until he was 21. By then, it had proved too much. He had to leave.

Ernest travelled to Britain to study social work at the University of Birmingham, but the only way he could persuade his father to sponsor him was to enter an arranged marriage back in Cameroon. More than a decade on, he still cannot talk about it.

He had arrived, as so many do, with dreams of what could be in Britain. Yet his time here has been marked by fear – the homophobia he encountered while living with members of the Cameroonian diaspora in England to the exhaustion of experiencing homelessness.

He claimed asylum on the grounds of sexual orientation eight years ago – it took him until them to realise this was an option for him.

All the while, according to a report from advocacy group Refugee Council, waiting times for an initial decision have risen almost tenfold in the last decade. The backlog in the asylum application process has surged from 3,588 in 2010 to 33,016 in 2020. Overall, applications have tumbled by 18 per cent in 2020, compared with 2019.

It’s a situation that many fear could be worsened by Priti Patel’s “New Plan for Immigration“, widely labelled “anti-refugee”. Touted as a way to “fix the broken asylum system” in a “fair but firm” way, the Nationality and Borders Bill would make Britain’s immigration policies among the most restrictive in Europe and make it even more difficult for queer asylum seekers especially to navigate.

Critics say it breaches international and domestic law in at least 10 ways, and effectively violates the United Nations 1951 Refugee Convention, to which Britain is a signatory.

It was backed in its second reading in Parliament in July and is, at the time of writing, in the committee stage.

What will the ‘anti-refugee’ bill mean for LGBT+ asylum seekers?

The bill would place people seeking asylum into two groups depending on whether they arrived through a resettlement scheme or via other means, such as by boat or truck. The latter would be treated as a criminal offence and result in arrest.

People smugglers would face life, the Home Office said, and it would make it a criminal act for people to help asylum seekers arrive into Britain – even on humanitarian grounds.

In a “factsheet” from the Home Office, the department said it will “continue to resettle genuine refugees directly from regions of conflict and instability”.

Among other changes is a requirement that LGBT+ people pursuing asylum disclose their sexuality and/or gender identity immediately on arrival. They would also be required to provide evidence at the beginning of the process.

And as their claims are processed by immigration officials, asylum seekers could be housed in reception centres – with some being overseas. They would be “removed to a safe country while their asylum claim is processed,” the Home Office said.

This option, however, would require international agreements that currently do not even exist.

The Home Office currently refuses four out of five LGBT+ claims – a figure that has steadily increased over the last few years.

Reports over the years have suggested a playbook where decision-makers use troubling methods and derogatory stereotypes when deciding whether an LGBT+ person is who they say they are.

The Home Office, Ernest says, has “no empathy” and is “not aware or understanding of what people go through”.

“If you understand and exercise empathy, you treat people differently,” he said. “You can’t say this asylum seeker is a good one because they took a train but this one is bad because he came through a plane or because he took eight years to seek asylum.

“I didn’t even know I could live safely in this country.”

Ernest stressed how, when he moved to England, he was greeted by the very homophobia he sought to escape.

He briefly lived with members of the Cameroonian diaspora in London, until their homophobia proved too much and he left. He lived without a home for some time.

It was only after receiving support from LGBT+ charities in Birmingham did Ernest find the safety he needed to live his truth.

Such local support would all be taken away for many queer migrants if they are shipped to offshore detention centres in a country where their rights and safety could be at risk.

For queer asylum seekers, the bill could mean turning to crime to survive

Priti Patel’s immigration bill would also force many queer migrants into life-threatening acts to survive, warned Abbey Kiwanuku, founder and director of Out&Proud Africa LGBTI and a refugee himself.

“If the new immigration bill becomes a law, its ramifications for LGBT+ asylum seekers will be severe,” he said over email.

“During my 18 years in the UK, I have never met an asylum seeker who came to the UK through a resettlement program. The law will not deter LGBT+ asylum-seekers from coming to the UK.

“However, it will stop them from applying for asylum and encourage them to stay under the radar.”

They will be thrown into the hands of traffickers

Kiwanuku explained that many undocumented queer migrants, their pathways limited, “engage in crime to survive. For example, by selling drugs, engaging in chemsex and other risky sexual practices and subject to exploitation in various states of servitude”.

With many unable to enter Britain through resettlement schemes, they will be “thrown into the hands of traffickers”.

The bill would also take aim at asylum seekers such as Mary, a lesbian who fled persecution from eastern Africa and is currently going through the process.

“The asylum system is hostile,” she said over Zoom, “but with the new proposed laws, it makes it even more brutal.”

She amplified Ernest’s concerns with defining “legal routes” into the country: “When you’re running away from persecution, sometimes you don’t have a choice how you enter the country.”

Many of the new proposals are callous and confusing, Mary said.

“To have to provide evidence at the first stage, for me, it doesn’t make any sense. Some asylum seekers like me arrive only with the clothing they’re wearing.”

She added that many queer folks seeking sanctuary need time to build up their case and to access legal aid and immigration lawyers with experience of LGBT+ causes.

“Some people who are LGBT+ have to collect ‘evidence’ when you’re inside the country because it is easier to collect it when only now they are safe to be themselves.

“It’s like slamming a door on someone, like if you don’t provide it now then your claim is not genuine. It’s going to be dire for the LGBT+ community.”

Above all, Mary, whose story features in the book Free To Be Me, said she wishes policy-makers could simply spend a day in her life.

To know that, if they don’t provide evidence from “day one”, you will be “sent back to your country where you will face persecution”. To live each day in fear of being sent back to a country that considers your existence a crime.

For now, all Mary can do is wait. The day she is granted asylum – granted an escape – is one that remains far-off. But she is patient. Being turned down, she said, “is not an option”.

“Being granted asylum, for me, it would be a big relief.

“To be able to live like any other human being. A relief knowing that, at long last, I’m going to live.”