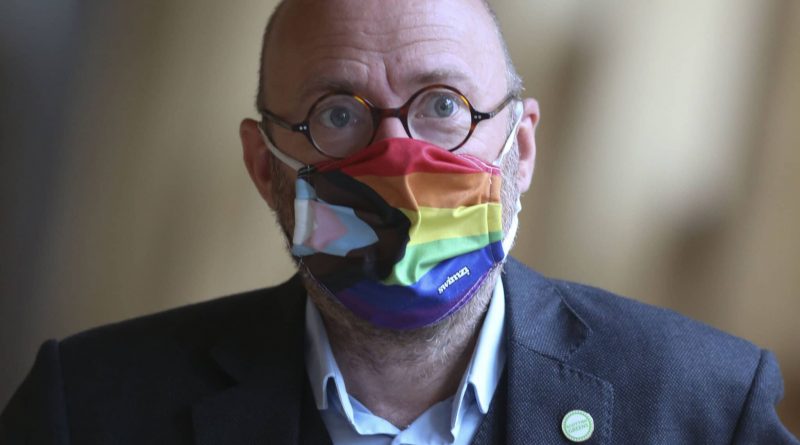 LGBT+ charity Stonewall is the victim of an “opportunistic hate campaign”, says Patrick Harvie, co-leader of the Scottish Green Party.

Speaking to The Scotsman at his party’s annual conference, Harvie pointed out that the LGBT+ community is “overwhelmingly united” in favour of trans rights.

“Stonewall is the biggest and successful LGBT+ human rights organisation in Europe, it has done incredibly work, it still does incredible work,” Harvie said. “Now it is under fundamental attack by those who have never supported my community’s human rights, who are mobilising around an opportunistic hate campaign specifically targeted against trans and non-binary people at the moment.”

The Greens co-leader, who was recently appointed a government minister under the new Scottish National Party cooperation agreement with the Greens, said that the attacks on Stonewall are “disgraceful” and a “hate campaign”.

“It is really really prominent across the media and across all too much of politics as well,” Harvie added.

The agreement between the SNP includes a commitment to reforming the Gender Recognition Act (GRA), the 2004 law that governs the process by which adult trans men and women can obtain legal recognition of their gender. This is used to update the gender marker on a birth certificate, which is important for pensions and marriage.

Anti-trans campaigning against GRA reforms have seen Scotland consult the public on planned changes twice, with a clear majority of respondents each time supporting reforms that would streamline the legal gender recognition process and make it easier for trans people to change their legal gender, including by removing the need for a medical diagnosis of gender dysphoria.

Harvie said he is “really pleased” that GRA reforms will be going ahead during this session of parliament.

“We will not allow ourselves to fragmented in a way that some would like because we know where that will go,” he said.

“That will go toward where Texas is at the moment with fundamental attacks, not just on queer people’s human rights but on women’s reproductive rights as well.

“Promises that have been delayed for far too long will now be delivered as well as improvements on trans people’s health care.”

Stonewall, which is the largest LGBT+ charity in Europe, has been subjected to relentless hostility from media and politicians in recent years for its strong commitment to trans rights.

This has resulted in several organisations withdrawing from the charity’s “Diversity Champions” programme – a workplace-inclusion scheme that employers use to ensure they have LGBT+ friendly workplaces, for example by ensuring that lesbian parents have equal access to parental leave policies.

The latest company reportedly leaving Stonewall’s “Diversity Champions” scheme is the BBC, with LGBT+ insiders telling Vice World News that they are “horrified” and “super scared” by the planned withdrawal.

Of its decision to cut ties with Stonewall’s “Diversity Champions” programme, a BBC spokesperson previously told PinkNews: “We aim to be industry leading on workforce inclusion and take advice from a range of external organisations, however we make the final decision on any BBC policies or practices ourselves.

“We do not take legal advice from Stonewall and we do not subscribe to Stonewall’s campaigning. The charity simply provides advice that we are able to consider.

“As a broadcaster, we have our own values and editorial standards – these are clearly set out and published in our Editorial Guidelines. We are also governed by the Royal Charter and the Ofcom Broadcasting Code.”