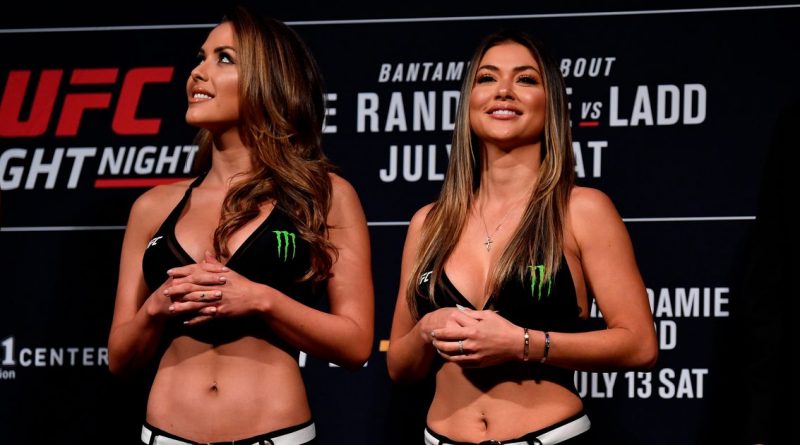 Popular UFC ring girls Arianny Celeste and Brittney Palmer have fired back at Khabib Nurmagomedov’s criticism of their roles.

Nurmagomedov raised eyebrows last week when he suggested that ring – or octagon – girls serve no purpose in sports such as MMA and boxing.

His comments drew a response from Conor McGregor, who tweeted a picture of a scene from the Simpsons that depicted two girls labelled as Celeste and Palmer dancing around a character labelled as Nurmagomedov.

And now both Celeste and Palmer have responded to Nurmagomedov’s comments about ring girls.

Since retiring from professional competition last October, Nurmagomedov has been coaching fighters at the American Kickboxing Academy and has also launched his own MMA promotion.

Ring girls have not appeared at any of his Eagle Fighting Championship events and Nurmagomedov explained: “I don’t want to offend anyone, ring girls are the most useless people in martial arts. What is their function?

“I have a question, you can show it is the second round that is on the screen.

“There are people who understand martial arts and they are walking. This is my personal opinion Do they develop the sport? Or they help people to see it is the second round now?

“I realise that it is a history. History knows many mistakes. We read history to avoid mistakes of the past in the future.

“If we look in the history it says they are useless. That is my personal opinion.”

Nurmagomedov’s comments have also been criticised by former UFC champion Michael Bisping, who defended ring girls such as Celeste and Palmer.

He said on his podcast: “They’re a little bit extra for the show. And I like it because it’s historic in boxing and now with MMA, of course. It’s a little bit of fun.

Do you think that ring girls serve no purpose in combat sports? Comment below

“I’m a huge fan of Khabib. But come on, man! Let the girls have a job. They make a lot of money with sponsorships and endorsements.”

It’s not the first time ring girls by a former UFC star.

“I actually don’t talk about anyone. It blows my mind that someone who doesn’t even know me continuously picks on me. And that’s all I see her as: a big bully.”