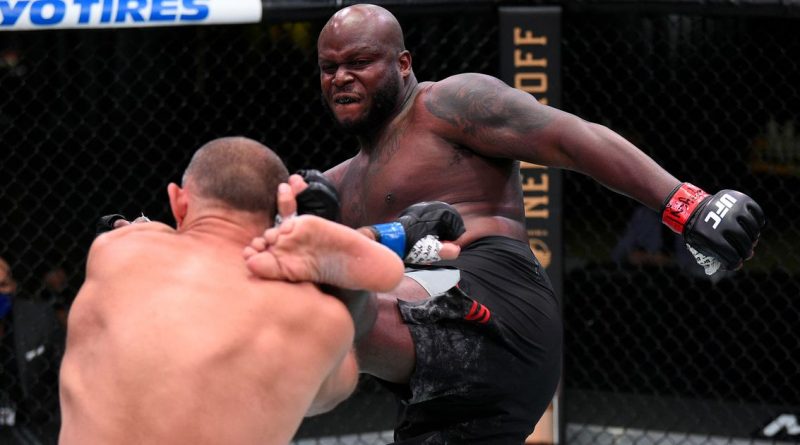 Fan favourite Derrick Lewis will face the undefeated Ciryl Gane this weekend in the main event of UFC 265, with the interim heavyweight title on the line.

The likes of former champion Jose Aldo, Pedro Munhoz, Vincente Luque and Michael Chiesa are among those who will feature on the card, which takes place at the Toyota Center in Houston, Texas.

The action will begin at 11pm for fans in the UK, with the first four fights taking place on UFC Fight Pass before the BT Sport prelims kick off at 1am on BT Sport 2.

The pay-per-view main card will begin at 3am, and will open with a bantamweight fight between Song Yadong and Casey Kenney.

Here’s everything you need to know about tonight’s fights…

In what promises to be an exciting stand-up war, Aldo will meet his countryman Munhoz in the co-main event of UFC 265.

The fight will be Aldo’s fourth at bantamweight since moving up from 145-pounds following his loss to now champion Alex Volkanovski. After dropping fights to Marlon Moraes and Petr Yan, Aldo picked up his first win in his new weight class against Marlon Vera this past December. A win against Munhoz could push Aldo into the top three at 135-pounds.

Like his opponent, Munhoz has lost two of his last three UFC appearances. ‘The Young Punisher’ avenged his 2015 defeat to Jimmie Rivera this past February, winning by unanimous decision.

Since returning to welterweight in 2018, Chiesa has won four consecutive fights
(

A welterweight fight that is flying massively under the radar, top ranked contenders Chiesa and Luque will battle it out to try and progress further up the 170-pound ladder.

Since returning to welterweight in 2018, Chiesa has won four consecutive fights. ‘The Maverick’ submitted Carlos Condit in his first fight back at 170-pounds and has since won decisions against Diego Sanchez, Rafael Dos Anjos and Neil Magny.

Of Luque’s 13 wins in the UFC, 12 have come by stoppage. Nicknamed ‘The Silent Assassin’ for a reason, his violent fights often go under the radar. Luque is on a three-fight winning streak, last defeating former welterweight champion Tyron Woodley by submission in March.

Torres and Hill will meet at UFC 265 in a rematch of a fight that took place over six years ago, with Torres having her hand raised in their first meeting.

Torres was in a very different place of her career back then, improving to 6-0 with her win over Hill. ‘The Tiny Tornado’ suffered four defeats across 2018-19, but has recently rebounded with back-to-back wins against Brianna van Buren and Sam Hughes.

Hill fought four times in 2020, going 2-2 along the way. After wins against Hannah Cifers and Loma Lookboonmee, she suffered frustrating split decision losses to Claudia Gadelha and Michelle Waterson. Hill won a decision against Ashley Yoder in March.

Both Yadong and Kenney will hope to get back in the win column after suffering decision losses at UFC 259 earlier this year.

Yadong dropped his first UFC loss to Kyler Phillips at the March pay-per-view event. One of the younger fighters on the roster at 23-years-old, Yadong had won five fights in the UFC before his last loss. ‘

In the main preliminary fight of the night, Bobby Green will take on surging lightweight contender Rafael Fiziev.

Green will fight for the first time so far in 2021. Fiziev, who is a training partner of UFC bantamweight champion Petr Yan, last knocked out Renato Moicano at UFC 256 in December.

With three losses in his last four fights, Vince Morales desperately needs a win in this fight, or else he faces being cut by the UFC.

Contender Series standout Drako Rodriguez will hope for a better outcome than his UFC debut back in February, as he was knocked out in the first round by Aiemann Zahabi.

The UFC veteran Ed Herman is one of the longest-serving fighters on the roster, making his 25th UFC appearance against Menifield.

It took Menifield two appearances on the Contender Series to eventually be picked up by the UFC. Being signed to the promotion in 2019, Menifield has gone 3-2 since then, recently defeating Fabio Cherant by submission in March.

In what would have been a fight against two of the best women’s strawweights many years ago, former title challengers Karolina Kowalkiewicz and Jessica Penne both find themselves unranked at 115-pounds.

Kowalkiewicz has lost six of her last eight fights, whilst Penne has dropped three of her last four.

Manel Kape will look for his first promotional win at UFC 265. Kape lost a unanimous decision to Alexandre Pantoja in February and a controversial split decision to Matheus Nicolau the following month.

After impressing on the Contender Series, Osbourne was signed to the UFC in 2019. He made his debut at 145-pounds losing to Brian Kelleher, then dropped to 135-pounds to defeat Jerome Rivera in February. Osbourne will now drop down to flyweight to face Kape.

Originally scheduled for UFC Vegas 31 last month, this fight was moved back due a positive Covid-19 test in Anderson Dos Santos’ camp.

Johns, another Contender Series standout, has gone 2-1 during his current run in the UFC. He last defeated Kevin Natividad by KO in October to earn a $50,000 performance bonus.

Victoria Leonardo will look for her first win in the UFC against Melissa Gatto this weekend. Leonardo was knocked out by surging flyweight contender Manon Fiorot in January.

The undefeated Gatto has not fought since September 2018. Her last four scheduled fights have all been cancelled, meaning she will search for her first UFC win against Fiorot.

Munoz Jr is a former KOTC bantamweight champion who has gone 10-1 during his professional career. He suffered his first career loss in his UFC debut last August.

Like his opponent, Jamey Simmons will also look for the first win of his UFC career at UFC 265. ‘The Afro Samurai’ lost out in his UFC debut to Giga Chikadze last July.