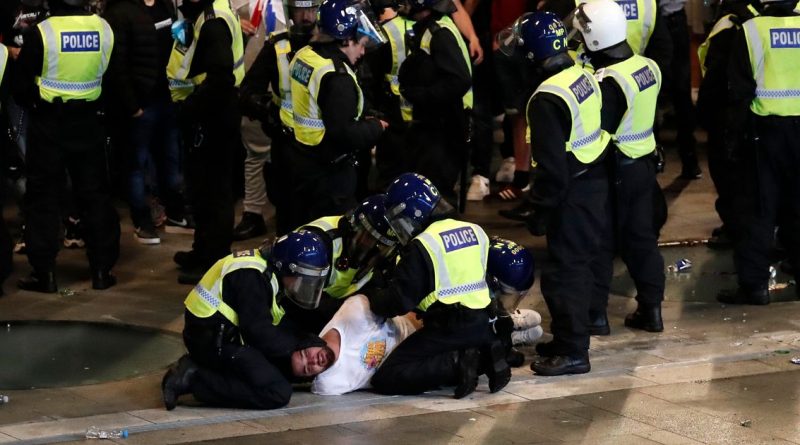 UEFA have announced that they have opened an investigation over the shameful scenes at Wembley ahead of England’s Euro 2020 final against Italy last month.

What was thought to be thousands of ticketless fans broke into the stadium before the match, and some clashed with police and each other.

A total of 45 people were arrested on the night with 19 police officers injured as they confronted the volatile crowds.

And UEFA will take action as they look into just what went wrong before the showpiece event in North London.

A statement released on Tuesday read: “Following an investigation conducted by a UEFA Ethics and Disciplinary Inspector into the events involving supporters which occurred inside and around the stadium during the UEFA EURO 2020 final match between the national teams of Italy and England played on 11 July at Wembley Stadium, London, disciplinary proceedings have been opened against the English Football Association for a potential violation of Article 16(2)(h) of the UEFA Disciplinary Regulations for a lack of order or discipline by its supporters.

“Further information on this matter will be made available in due course.”

There were shameful scenes ahead of kick-off
(

It comes after UEFA already announced their intentions to charge the English FA for a number of other incidents which took place.

A pitch invader managed to make his way onto the playing surface in the second half before eventually being escorted away by stewards.

And a large number of England fans booed the Italian national anthem ahead of kick-off.

Elsewhere some let off fireworks and flares, and there is also a charge for the throwing of objects.

A number of high-profile figures were caught up in the chaos, and Three Lions defender Harry Maguire recently revealed that his father was injured in a crush near a turnstile where some without tickets gained access.

He told The Sun: “My dad was in the stampede. I have not spoken with him too much but I am pleased my kids didn’t go to the game. It was scary – he said he was scared and I don’t want anyone to experience that at a football match.

“I have seen a lot of videos and have spoken to Dad and my family. It was my dad and agent who suffered the most.

“I hope we can learn from this and make sure it doesn’t happen again.

The Manchester United centre-back added: “My dad’s a big fan – he got on with in.

“He was struggling with his breathing afterwards because of his ribs, but he’s not one to make a big fuss.

“The experience at Wembley is always amazing, filled with great people and great fans normally. But this time was obviously the final and everyone got overwhelmed and the way some people acted was totally wrong.

“Dad will always support me and go to the games but he will be a little bit more aware of everything going on around. We should all be more aware and learn from it.”