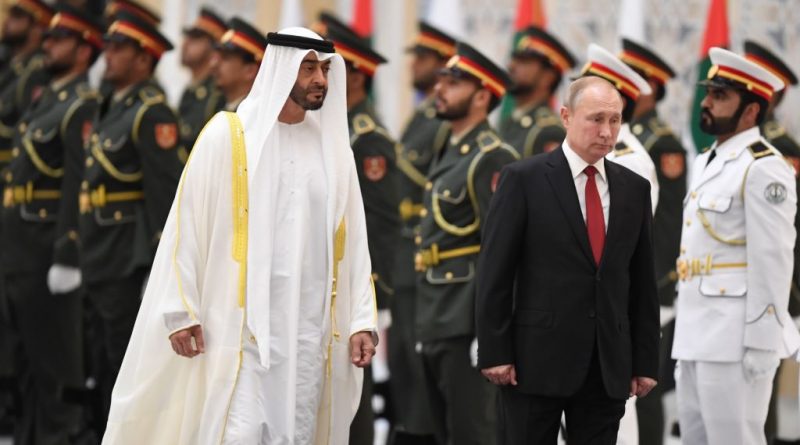 
The ruler of the United Arab Emirates will travel to Russia on Tuesday to meet with President Vladimir Putin, amid an upsurge in the conflict between Moscow and Kyiv.

The UAE leader’s visit comes as Putin’s almost eight-month invasion escalates in the wake of a string of Ukrainian advances and an explosion on a key bridge link to Crimea that Moscow blamed on Ukraine’s secret services. Russian missiles on Monday struck the Ukrainian capital Kyiv and other cities across the country, with Putin threatening further strikes.

Read More: Russia Wants to Lock Ukraine Back in the Soviet Cellar

Dubai’s former finance chief, Nasser al-Shaikh, said on Twitter that the UAE ruler was going to try to “defuse a European war” that no one expected would reach this level of escalation.

Last week, U.S. President Joe Biden warned that that Putin’s threats he might use nuclear weapons in his invasion of Ukraine could lead to “Armageddon.”

The UAE and Russia, together with Saudi Arabia, are part of the OPEC+ alliance. Last week the organization defied the U.S. by slashing crude supply, a shock decision that keeps oil prices high at a time of global concern about inflation.

Read More: The UAE’s New Leader Is Turning the Tiny Kingdom Into a Major Power Player

Saudi Arabia along with Turkey helped broker a prisoner exchange deal between Russia and Ukraine in late September, raising the possibility that the Gulf nation could try to mediate between the warring parties. Turkish President Recep Tayyip Erdogan, who’ll meet Putin later this week, has also repeatedly offered to act as a peacemaker.

The UAE, Saudi Arabia and Turkey have refused to implement Western sanctions on Russia and have maintained ties to both sides in the war.

“The Emiratis have sent signals that they’re ready to mediate,” said Elena Suponina, a Middle East expert based in Moscow. “They’re willing to coordinate these efforts with Saudi Arabia and Turkey.”