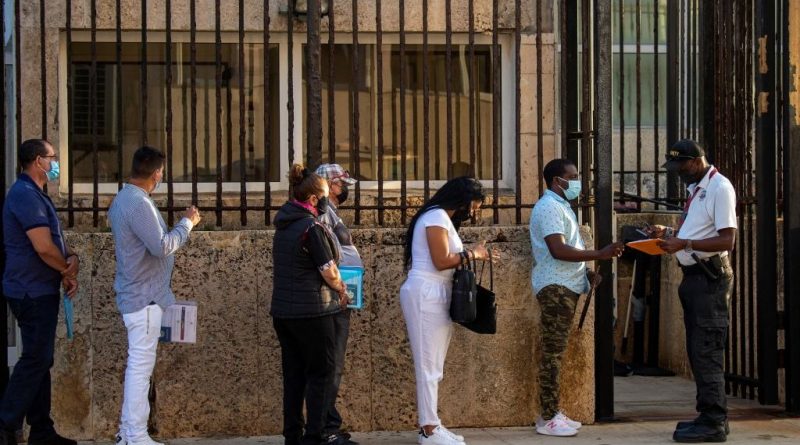 
HAVANA — The United States Embassy in Cuba is reopening visa and consular services Wednesday, the first time it has done so since a spate of unexplained health incidents among diplomatic staff in 2017 slashed the American presence in Havana.

The Embassy confirmed this week it will begin processing immigrant visas, with a priority placed on permits to reunite Cubans with family in the U.S., and others like the diversity visa lottery.

The resumption comes amid the greatest migratory flight from Cuba in decades, which has placed pressure on the Biden administration to open more legal pathways to Cubans and start a dialogue with the Cuban government, despite a historically tense relationship.

They are anticipated to give out at least 20,000 visas a year, though it’s just a drop in the bucket of the migratory tide, which is fueled by intensifying economic and political crises on the island.

In late December, U.S. authorities reported stopping Cubans 34,675 times along the Mexico border in November, up 21% from 28,848 times in October.

Month-to-month, that number has gradually risen. Cubans are now the second-largest nationality after Mexicans appearing on the border, U.S. Customs and Border Protection data shows.

The growing migration is due to a complex array of factors, including economic, energy and political crises, as well deep discontent among Cubans.

While the vast majority of Cuban migrants head to the U.S. via flights to Nicaragua and cross by land at the U.S. border with Mexico, thousands more have also taken a dangerous voyage by sea. They travel 90 miles to the Florida coast, often arriving in rickety, precariously constructed boats packed with migrants.

The exodus from Cuba is also compounded by rising migration to the U.S. from other countries like Haiti and Venezuela, forcing the U.S. government to grapple with a growingly complex situation on its southern border.

The renewal of visa work at the embassy comes after a series of migration talks and visits by U.S. officials to Havana in recent months, and may also be the sign of a slow thawing between the two governments.

“Engaging in these talks underscores our commitment to pursuing constructive discussions with the government of Cuba where appropriate to advance U.S. interests,” the U.S. Embassy said in a statement in November following an American delegation’s visit to Cuba.

The small steps are far cry from relations under President Barack Obama, who eased many American Cold War-era sanctions during his time in office and made a historic visit to the island in 2016.

Visa and consular services were closed on the island in 2017 after embassy staff were afflicted in a series of health incidents, alleged sonic attacks that remain largely unexplained.

Read More: U.S. Diplomats in Cuba Were Injured by a ‘Sonic Weapon.’ What Is That?

As a result, many Cubans who wanted to legally migrate to the U.S. have had to fly to places like Guyana to do so before migrating or reuniting with family.

While relations have always been tense between Cuba and the U.S., they were heightened following the embassy closure and the Trump administration’s tightening of sanctions on Cuba.

Under President Joe Biden, the U.S. has eased some restrictions on things like remittances and family travel from Miami to Cuba, but has fallen short of hopes by many in Cuba that a Biden presidency would return the island to its “Obama era.”

Restrictions on tourist travel to Cuba, and imports and exports of many goods, remain in place.

Also kindling tensions has been the Cuban government’s harsh treatment of participants in the island’s 2021 protests, including hefty prison sentences doled out to minors, a constant point of criticism by the Biden administration.

Cuban officials have repeatedly expressed optimism about talks with the U.S. and steps to reopen visa services. Cuban Deputy Foreign Affairs Minister Carlos Cossio said in November that ensuring migration through safe and legal pathways is a “mutual objective” by both countries.

But Cossio also blamed the flight of tens of thousands from the island on U.S. sanctions, saying that “there’s no doubt that a policy meant to depress the living standards of a population is a direct driver of migration.”