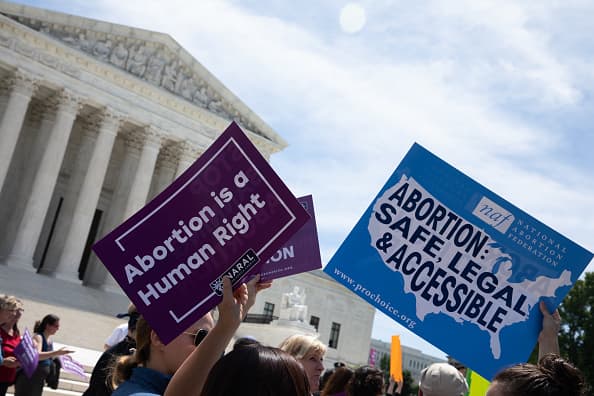 Abortionrights activist gathered outside the U.S. Supreme Court to protest against the recent abortion laws passed across the country in recent weeks. Tuesday, May 21, 2019. Washington, D.C. (Photo by Aurora Samperio/NurPhoto via Getty Images)

A U.S. appeals court on Thursday refused a petition by the U.S. Department of Justice to put on hold Texas’s restrictive abortion law, which bars the procedure as early as six weeks into pregnancy.

The U.S. Fifth Court of Appeal said the law could stay in effect pending “expedited” further proceedings in the high profile legal challenge.

The Texas abortion law, which took effect on Sept. 1, makes no exceptions for pregnancies caused by rape or incest.

It also lets ordinary citizens enforce the ban, rewarding them at least $10,000 if they successfully sue anyone who helped provide an abortion after fetal cardiac activity is detected. Critics of the law have said this provision enables people to act as anti-abortion bounty hunters.

The Justice Department has argued that the law impedes women from exercising their constitutional right to terminate a pregnancy that was recognized in the Supreme Court’s 1973 Roe v. Wade decision, which legalized abortion nationwide.

The department also argued that the law improperly interferes with the operations of the federal government to provide abortion-related services.