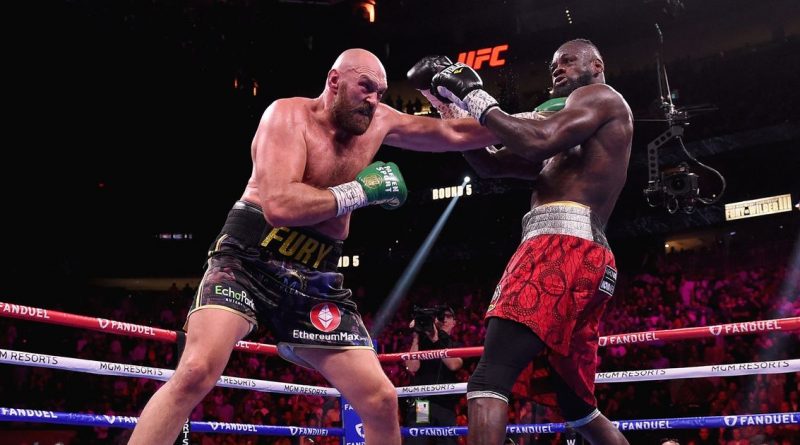 
Fury outlanded his opponent 150-72 in total punches throughout the fight in his victory in Las Vegas, and also used his jab as a key weapon to dismantle Wilder

Tyson Fury landed twice as many punches as Deontay Wilder during their heavyweight trilogy fight.

The ‘Gypsy King’ retained his WBC title and ended the trilogy with a devastating eleventh round stoppage.

But he was matched well at times by the powerful Wilder, who put the Briton on the canvas twice earlier in the contest.

And the punch statistics have been released after the historic heavyweight clash, with Fury out-landing his opponent by over double in total shots.

According to Compubox data, Fury was successful with 150 scoring punches during the eleven round distance compared to Wilder’s 72 shot total.

Tyson Fury was dominant for large parts against Deontay Wilder
(

The ‘Bronze Bomber’ was also limited on his success with the jab, landing just nine during the fight in comparison to Fury who landed 36.

Fury’s rangey jab helped him keep the distance at key parts of the fight, and nudge him in front on the judges’ scorecards later in the fight.

Wilder’s heavy right hand was also a key weapon in the fight, but was well matched with Fury also dominating the scoring with more power punches landed.

The 33-year-old champion had a much higher success rate than his opponent, with Wilder only out-landing his opponent with 36.5% of his shots landing in the dominant fourth round.

Despite the dominance that the stats can hand Fury, the WBC champion has admitted it was a tough contest but one that he felt he “delivered” during.

Who will Wilder face if he returns to the ring? Let us know your thoughts in the comments section below.

“I give him the glory for the victory. He’s a tough man,” Fury said after the trilogy battle. “He took some big shots tonight. It was a great fight, as good as any trilogy in history.

“I beat him three times and I’m a sportsman and wanted to give him some love and respect. And he didn’t want to give it back. That’s his problem and I pray for him.

“This was a great fight and October 9, 2021 will go down in history, I hope. I always said I was the best in the world and he was the second best. Don’t ever doubt me. When the chips are down, I will always deliver.

“And I want to say if it wasn’t for Sugar (Hill), America’s and Detroit’s own, I wouldn’t have gotten through that fight tonight… He told me, he said get your jab working, big guy, and throw that right hand down the middle. That’s how the big dogs do it.

Fury was critical of his opponent’s reaction to defeat, but Wilder was largely uninterested and was taken to hospital for medical check-ups.

And the 33-year-old will now celebrate his victory, before returning to the UK to spend time with his family.

But he could be immediately handed his next test, with Dillian Whyte now leading the pack to take on the WBC champion.

The ‘Body Snatcher’ was declared as the mandatory challenge before the trilogy clash, and could see Fury continue the pursuit of his five-fight wishlist.