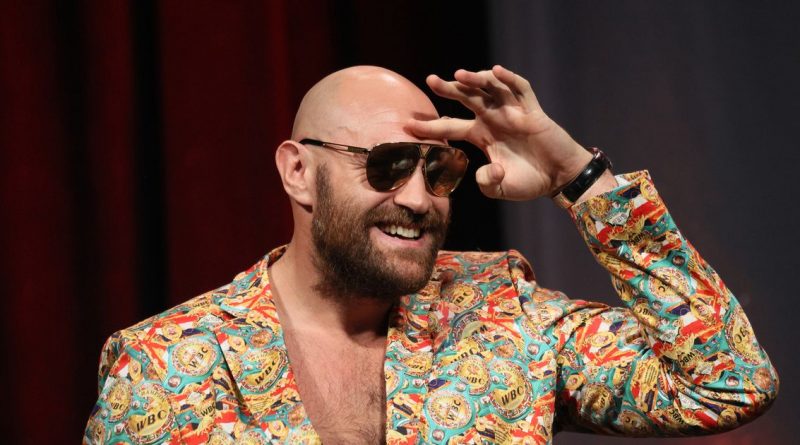 Tyson Fury wasn’t surprised that he wasn’t allowed to face off with Deontay Wilder after their press conference on Wednesday.

Fury makes the first defence of his WBC heavyweight title since beating Wilder in their rematch last February and the two men traded insults with each other on stage ahead of their trilogy fight this Saturday night in Las Vegas.

Presenter Kate Abdo called for a face-off between the two after the press conference finished, but a furious Bob Arum and Frank Warren ensured it didn’t take place due to no security being in place.

Fury was left visibly confused on stage whilst Wilder and his trainers walked away, which left the Brit thinking Wilder wanted no part of the face-off.

He told reporters of the situation: “What I made of it was he ran off the stage and didn’t want to face me. Man to man, he was not willing.”

Fury jokingly said Warren thought he was going to “chin” Wilder and that he would have “nutted” the American if they did come face-to-face.

Warren told Queensbury Promotions he feared the worst when Abdo called for the face-off as if Fury and Wilder came to blows it could have scuppered their trilogy.

“It’s madness. I really didn’t get that and I was quite disappointed from that perspective.”

Wilder has accused Fury of tampering with his gloves before their second fight which the Brit won by stoppage.

Who wins in the trilogy this weekend, Fury or Wilder? Let us know in the comments section below

Fury has scoffed at Wilder’s claims and stated that Wilder’s trainer Jay Deas watched his hands being wrapped before the fight.

The WBC champion thinks Wilder is mentally unstable heading into the trilogy which is why he’s made several excuses about their second fight.

He told Boxing Scene : “Do you know what it is with Wilder? He’s very unstable at the moment and he has to figure out reasons why he lost the second fight.

“I just feel sorry for him because it must be hard to be undefeated for 10 years, knock out all of your opponents, then fight me and lose and get knocked out in probably the most one-sided champion versus champion fight in history.”