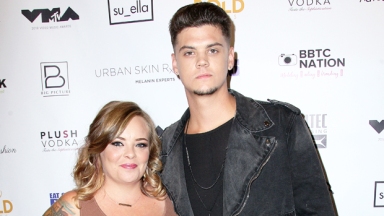 
Teen Mom OG star Tyler Baltierra revealed that he’s “officially done” with a new cut, in which he was able to “drop 24 pounds while maintaining the strength” he “built” while he was gaining. The top photo, which you can see below, shows Tyler weighing 203 pounds at the end of March 2022. It was also the end of his latest bulk. And in the photo below that, which you can also see below, Tyler weighs 179 pounds. That image, he says, was taken today, Aug. 11, 2022, at the end of his cut. So in just five months, he lost a total of 24 pounds — pretty impressive!

“I’m pretty happy with the results. It makes me even more pumped to see how the next cut goes after I’m done bulking again!” Tyler said in the caption to his Instagram post. “I did decide to shift my goals a little & focus more on aesthetics/muscle building for this next bulk cycle, rather than strength building (like I was doing before). I still have a long way to go until I reach my ultimate goal, but I promised myself that I would post more about my fitness journey, because It helps keep me accountable & I get questions about it from you guys all the time lol”.

Just a few months ago, in June, Tyler showed off his “cut” abs in another set of transformation photos, and we were impressed then. But this new cut of his has blown us away. Tyler said he’s going to continue with his fitness journey and document more of it on his Instagram account, so we can’t wait to see what she hares next.

Tyler is married to Catelynn Lowell, and they have four children together: baby Rya, Novalee, 7, and Vaeda, 3. They’re also the biological parents of daughter Carly, 12, who was born in 2009, and put up for adoption. Their journey has been documented on both 16 & Pregnant and Teen Mom OG.