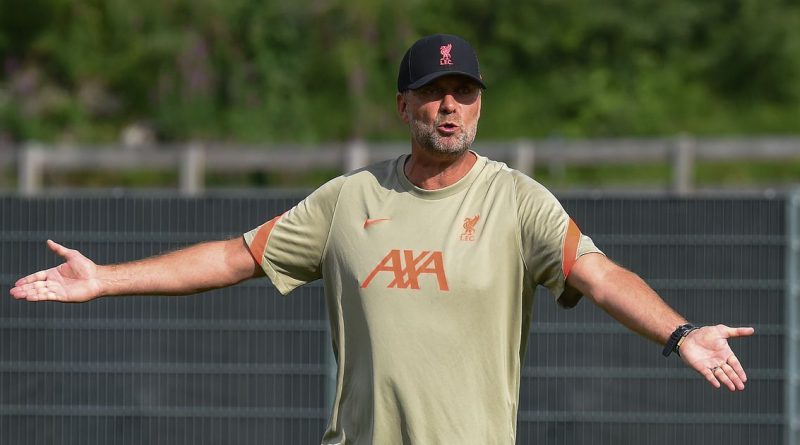 Despite making an early move in the market this summer, Klopp has had to remain patient since finalising a deal for his first choice transfer target – and may have to wait a little while longer for his next

Liverpool have already landed their priority transfer target this summer with the important much-needed arrival of Ibrahima Konate.

But there can be no denying Jurgen Klopp would welcome another addition to his squad as the Reds prepare to put the horrors of last season behind them.

Having lost a vital cog in his midfield in Georginio Wijnaldum, Klopp is hoping the likes of Alex Oxlade-Chamberlain, Naby Keita and Harvey Elliott can step up to help fill the void.

And Klopp will slowly be coming round to the fact he may not get his other transfer wish this summer as the club’s owners Fenway Sports Group continue to count their pennies in a coronavirus-hit market.

The Liverpool boss is a known admirer of Borussia Monchengladbach midfielder Florian Neuhaus and is keen to add the 24-year-old to his squad.

So much so he has reportedly already made that clear to Neuhaus himself.

Neuhaus is naturally interested in linking up with his compatriot too – but there are two factors standing in the way of a deal.

According to Sport 1, Klopp is resigned to having to wait a year to bring Neuhaus to Anfield, but it is not due to previously reported squad restraints.

After shelling out £35million on Konate, the bulk of Klopp’s summer transfer kitty is gone.

Moreover, Klopp needs to get rid of some of his fringe stars before he can think about registering any more players – with 18 non-homegrown players currently in his squad – one more than the allotted Premier League quota.

Xherdan Shaqiri is up for sale but Liverpool are yet to attract any buyers – a similar situation to which Divock Origi finds himself in.


Offloading Harry Wilson has recouped £12m which can be used for new arrivals, but Monchengladbach’s asking price for Neuhaus is more towards the £35m mark.

That makes is pretty difficult for Liverpool to launch a bid this summer with just over a month remaining of the window, unless they can get any sales over the line.

However, Neuhaus is even accepting of the situation and is said to be ‘completely relaxed’ that a deal won’t go through this summer – with next year a more likely prospect.

By that time Liverpool do have the risk of his price tag going up, while Bayern Munich are also seemingly keeping tabs.


Meanwhile Klopp’s side continued their pre-season preparations on Thursday, losing a seven-goal thriller to Hertha Berlin in Austria.

Oxlade-Chamberlain struck home a sweet volley with minutes remaining to reduce the deficit but to no avail.