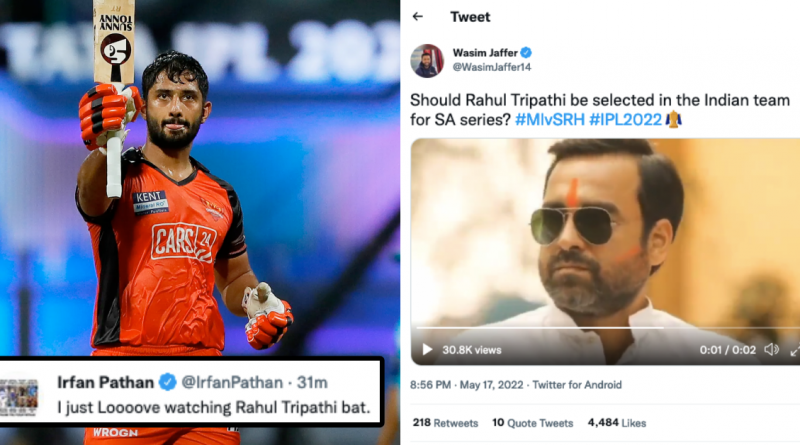 
Sunrisers Hyderabad (SRH) batter Rahul Tripathi put up another scintillating performance against the Mumbai Indians (MI) in a must-win game at the Wankhede Stadium on Tuesday.

SRH need a win to stay alive in the tournament and they had the pressure of setting a target. Their in-form opener Abhishek Sharma was dismissed early but Priyam Garg made the most of his opportunity at the top.

Garg, coming in place of Kane Williamson, scored a brisk 26-ball 42 and built a 78-run partnership with Tripathi to stabilize the innings. Garg took the initiative but once he fell, Tripathi took over.

In the company of Nicholas Pooran, the 31-year-old played exquisite strokes including his now-trademark straight loft down the ground. He smashed 3 sixes and 9 fours en route to a 44-ball 76.

He has come to SRH’s rescue so often and the Ranchi-born right-hander did it all over again. Pooran played his role to perfection as well scoring 38 runs in 22 balls but it was Tripathi’s knock that stole the limelight.

Although he fell in a bid to provide a great finish to the side, he had done his job and it was left to the middle order to apply the finishing touches. When he fell, SRH was 174/4.

Should Rahul Tripathi be selected in the Indian team for SA series? #MIvSRH #IPL2022 pic.twitter.com/O85gjM5YVO

Almost in 3+ Season Rahul Tripathi did well still no place in india?? One of the most underrated at this time,Should get chance!
Ahead of Tilak imo!!

Rahul Tripathi has the most runs by an uncapped player in IPL 2022.

If Rahul Tripathi doesn’t play for India, it’s our own loss.

End of a terrific knock by Rahul Tripathi – 76 runs from 44 balls – 3rd fifty of this season – best number 3 in this IPL by a big margin. pic.twitter.com/TQnypjDEys

Rahul Tripathi is probably one of the best uncapped players in this season of IPL.

If Rahul Tripathi doesn’t play for India, it’s our own loss.

76 in 44 for Rahul Tripathi, so happy for him. He’s always played so well with intent and now that he has become consistent, just so good to see him flourish like this.

Also Read – IPL 2022: Lot Of Young Careers Have Taken Off When Given Opportunity – Sanjay Manjrekar Suggests Changes For Mumbai Indians