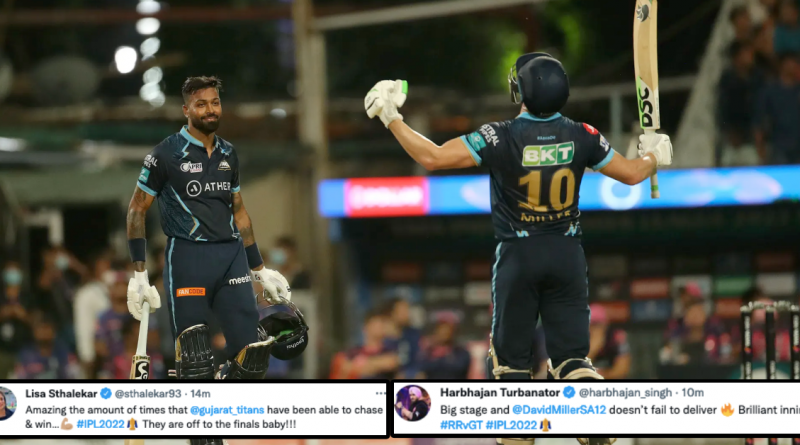 
Qualifier 1 of the Indian Premier League (IPL 2022) saw the battle between Hardik Pandya-led Gujarat Titans (GT) and Sanju Samson-led Rajasthan Royals (RR) at the Eden Gardens in Kolkata on Tuesday, May 24.

Gujarat Titans won the toss and opted to field first in the match and they made just one change to the playing XI by adding Alzarri Joseph to the team in place of Lockie Ferguson. On the other hand, Rajasthan Royals fielded an unchanged playing XI.

Mohammed Shami opened the attack for GT against Rajasthan Royals’ opening duo of Jos Buttler and Yashasvi Jaiswal and got smashed for 2 fours in the over.

Left-arm pacer Yash Dayal got the first breakthrough for Gujarat Titans in the second over by dismissing young opener Yashasvi Jaiswal for 3. At the end of the powerplay, Rajasthan Royals were at 55/1 with Samson at 30* and Buttler at 16*.

Sanju Samson’s sensational innings was brought to an end by Ravisrinivasan Sai Kishore on the 5th ball of the 10th over. Samson scored 47 runs off 26 balls, including 5 fours and 3 sixes. Also, he added brilliant 68 runs in 47 balls with opener Buttler.

After that, Devdutt Padikkal was dismissed by Hardik Pandya in the 15th over and he scored 28 runs off 20 balls, including 2 fours and 2 sixes. After 16 overs Rajasthan Royals were at 127/3 but in the next two overs, RR batters did a great job by smashing 18 and 14 runs.

In the end, Jos Buttler played a fabulous knock to help Rajasthan Royals score 188/6. The English wicketkeeper-batsman was able to score 89 runs off 56 balls, including 12 fours and 2 sixes.

Chasing the target, Gujarat Titans lost the wicket of star performer Wriddhiman Saha for a duck in the first over, which was bowled by Trent Boult.

In the end, David Miller smashed three consecutive sixes in the last over of Prasidh Krishna to help GT secure the victory. Miller scored 68 runs off 38 balls, including 3 fours and5 sixes while Hardik Pandya scored 40 runs off 27 balls, including 5 fours. They also had a century partnership.

Mubarka Nehra ji! Tussi ta chha gaye! What a win for @gujarat_titans 🔥 Kudos to the captain @hardikpandya7 and the team for playing splendidly throughout the tournament. Big, big congratulations 🎉 #RRvGT #IPL2022

Every match there is a new man of the match from Gujarat Titans. Unbelievable hitting by @davidmillerSA12. He made 16 runs look nothing in the last over. Congratulations to the most consistent Gujarat Titans for entering final of #IPL2022.#TATAIPL2022 # pic.twitter.com/nr1rnMgFay

Amazing the amount of times that @gujarat_titans have been able to chase & win…💪🏽 #IPL2022 They are off to the finals baby!!!

This Gujarat Titans middle-order was considered as one of the weakest among all teams ahead of the season. But look at how the likes of David Miller, Rahul Tewatia and Hardik Pandya have stepped up. Miller and Tewatia in particular!! Through to the Final in style!!#GTvsRR

‘Agent’ Miller ended up booking our ticket to the #IPLFinal! 😆 pic.twitter.com/RRw495pmPu

Prasidh never made Miller reach out outside off like Sams did.

He just bowled within his reach. A set Miller will destroy that line nine out of ten times.

Gujarat Titans will be playing IPL 2022 Final in front of home crowd in Ahmedabad with over 1,00,000 people attending it.

Prasidh has missed his lengths here, not by an inch or two, but by miles.

In the slot, half way into the pitch, and then slower one into the slot. Hopefully he learns from this.

This one hurts, but we go again in Ahmedabad.

What a remarkable run from Gujarat Titans. NOT A SINGLE FORMER CRICKETER / ANALYST gave them a chance after the auction. What a response.

Gujarat qualified into the final of IPL 2022.

Admiration for @gujarat_titans growing with every game and every passage of play.

Four runs and two run-outs off the final ball!

The unsung hero for me for @rajasthanroyals is Padikkal. Started playing in the middle & struggled,moved to the opening slot & struggled. Then again moved to the middle and has struck at 148. His last few knocks were impactful which scorecards wont reveal. #RRvsGT

The atmosphere at Eden is beautiful. pic.twitter.com/M4qJNi3CKu

Ladies and Gentlemen presenting you the Finalists of TATA IPL 2022.
The Name is Gujrat Titans ♥️🔥#GTvRR #IPL2022 pic.twitter.com/OIVpv2eyRU

3 BACK TO BACK SIXES BY MILLER 💥
GT, SEE U IN THE FINAL 🔥 #GTvsRR #Miller #IPL2022 #IPL #HardikPandya pic.twitter.com/t5xwQerYX7

Also Read: GT vs RR: Watch – Jos Buttler Gets Run-out For 89 In Qualifier 1