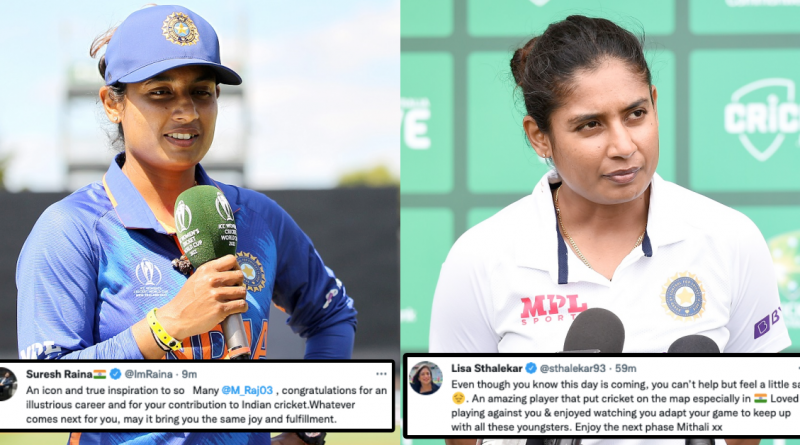 
Legendary India Women’s National Cricket Team batter and captain Mithali Raj has announced her retirement from all forms of cricket. The Indian cricketing icon had already retired from the shorter format of the game in September 2019.

Mithali Raj is the highest run-scorer in the history of women’s international cricket and she has been awarded by Arjuna, Padma Shri & Khel Ratna awards.

Mithali Raj also holds several records in Women’s cricket as she is the highest run-scorer in Women’s ODIs and she is the player to participate in most WODIs.

The 39-year-old took to Twitter on Wednesday, June 8 to make her retirement announcement. She stated that it was an honour for her to represent India at the highest level and added that she would stay involved in the game even after her retirement and will contribute to the growth of women’s cricket all over the world.

“I set out as a little girl on the journey to wear the India blues as representing your country is the highest honour. The journey was full of highs and some lows. Each event taught me something unique and the last 23 years have been the most fulfilling, challenging, & enjoyable years of my life.”

“Like all journeys, this one too must come to an end. Today is the day I retire from all forms of International Cricket. Each time I stepped out on the field, I gave my very best with the intent to help India win. I will always cherish the opportunity given to me to represent the tricolour,” she wrote in a message posted on Twitter.

“It was an honour to have led the team for so many years. It definitely shaped me as a person & hopefully helped shape Indian Women’s Cricket as well. This journey may have ended but another one beckons as I’d love to stay involved in the game I love and contribute to the growth of Women’s Cricket in India and the world over,” she further mentioned.

Thank you for all your love & support over the years!
I look forward to my 2nd innings with your blessing and support. pic.twitter.com/OkPUICcU4u

Congratulations and thank you for everything 👑🙏

She is truly an Indian legend 🛐
Happy retirement @M_Raj03 pic.twitter.com/15mw3Ozpzv

Happy retirement legend. You have set an example for women not only in our country but around the world. Best wishes for your 2nd innings! https://t.co/D8SZgwCYxq

Mithali Raj retires from all formats of the game, Thank you legend. 🇮🇳❤️#MithaliRaj pic.twitter.com/9VPm3NiGGg

Congratulations @M_Raj03 on one beautiful journey. Fortunate to have played alongside. You’ve inspired oodles of young girls to take up the sport. Your name shall remained etched forever in the hearts of cricket fans. Well played, truly. 👏 #mithaliraj pic.twitter.com/rC5coLutSc

People might hate her sometimes but deep down everyone knows she is a G.O.A.T. and inspiration for many Congratulation Mithali Raj for fantastic career and thank you for your contribution for Indian Cricket https://t.co/3o8xTBpIsW

An absolute legend of the game 🙌🏻 Thankyou for your service and everything you did towards Indian women’s cricket ❤️🇮🇳#ThankYouMithaliRaj #Legend #MithaliRaj https://t.co/SAvjN1ugtg

Mithali Raj retires from all formats of the game, Thank you legend.

As a youngster, she was equally good at Bharatnatyam & cricket. As time went on, she opted for cricket & kept Bharatnatyam aside.

I guess she might now find the time & passion to pursue it again.

Congratulations on a long career.

She also has the highest Women’s ODI average among all Indians (50.64) — and this is without any kind of filter required.

Ever since I knew what is Women’s cricket’s world, tomorrow will be the first day without Mithali Raj in that world. #ThankYouMithali

One of the bigger misfortunes of this sport is that the legendary Mithali Raj only played 12 Tests, a format in which she averaged 43.68, in all her career.

When we think about cricket, the first thing came into our minds is none other than Mithali Raj. One of the finest cricketer of all times calls it a day. Thank you for everything, @M_Raj03!

What a wonderful career ! #Mithali Raj, what you did is not easy for a women in a game like cricket. Thank you #MithaliRaj . The nation is indebted by your service to Women’s Cricket and Cricket!
Good luck for your 2nd innings .
Mithali Raj #retirement @M_Raj03 pic.twitter.com/2gF7P26GMC

Your contribution to Indian Cricket has been phenomenal. Congratulations Mithali Raj on an amazing career. You leave behind a rich legacy.

We wish you all the very best for your second innings 🙌🙌
Happy retirement #MithaliRaj #TeamIndia pic.twitter.com/LRJoAGbGmL

…And it’s curtains on a glittering 23-year career that made 🇮🇳 Indian Cricket lovers celebrate so many historic milestones. #ThankYouMithali, you are a star ✨#MithaliRaj #TeamIndia pic.twitter.com/kCTRxsJvE8

An icon and true inspiration to so Many @M_Raj03 , congratulations for an illustrious career and for your contribution to Indian cricket.Whatever comes next for you, may it bring you the same joy and fulfillment.
#WomensCricket pic.twitter.com/u93bk0SuA3

To play for India 🇮🇳 is a dream a very few fulfill and to be able represent the nation for 23 years is just amazing.
You have been a pillar to Women’s Cricket in India and have shaped the lives of many young girls.
Many congratulations on a phenomenal career @M_Raj03. https://t.co/jVHmMTW2YP

A story, a journey, a life worth telling. You’re and will always be an inspiration for every girl who dreams of playing cricket for India. A monumental career to say the least. Congratulations and have a great life ahead. 🙏🏽🇮🇳 https://t.co/tgOkfKLa8B

Congratulations on the phenomenal career @M_Raj03. Wishing you good luck for all your future endeavours. https://t.co/sTxxOKcA1G

Even though you know this day is coming, you can’t help but feel a little sad 😔. An amazing player that put cricket on the map especially in 🇮🇳 Loved playing against you & enjoyed watching you adapt your game to keep up with all these youngsters. Enjoy the next phase Mithali xx https://t.co/QIK9nE1Vdo

mithali raj. the words i associate with her are grace, poise & class – when she batted and how she conducted herself off the field. remember, before the pathbreaking 2017 world cup she had played for 18 years, shutting out the cynicism that surrounded the women’s game. legend!

You can be very proud of your career. A true legend and and a hero who inspired millions to dream about playing cricket. Congratulations and best wishes for your new innings @M_Raj03 #Legend #CricketTwitter https://t.co/Lh8VNAAx5h

And so an era ends. A thank you is insufficient for your immense and immeasurable contribution to cricket (not just women’s cricket) in India, Mithali di. Legend. https://t.co/DZiMdmDfLx

Congratulations mithali for a glorious career! I am sure you will continue to inspire young kids. Best wishes for your future endeavours 😇

Congratulations on a marvellous career @M_Raj03 🙌 You’ve been a fine example for cricketers across the country. Good luck for whatever lies ahead 😊👏 https://t.co/VuHla1691e