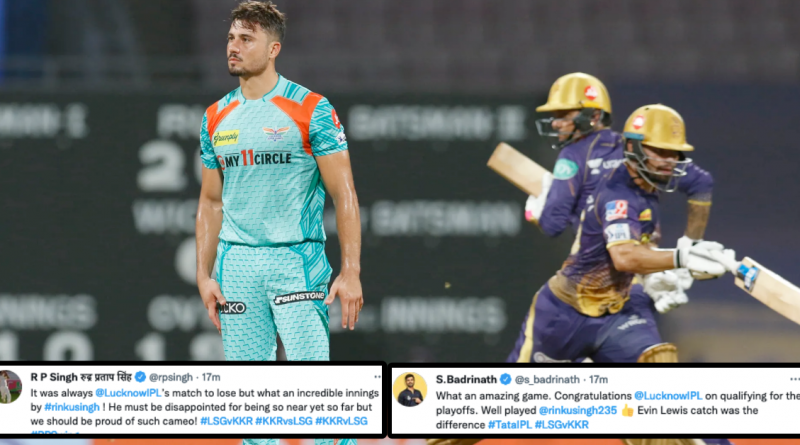 
Lucknow Super Giants (LSG) put on a batting masterclass in the first innings before restricting Kolkata Kolkata Knight Riders (KKR) to win a thriller in the last over, knocking the latter out of contention for a playoff spot in IPL 2022.

After winning the toss, KL Rahul opted to bat first. Quinton de Kock and Rahul got the team off to a sedate start, giving an indication that the pitch wasn’t playing true. However, once the two were set, they began the assault and showed no mercy. After scoring 44 in the powerplay, the duo took on the bowlers and smashed them all around the park.

De Kock scored his second century of a glittering IPL career off just 59 balls. He further upped the ante after reaching the milestone, eventually finishing on 140 off 70 balls. Rahul was unbeaten at the other end on 68 as LSG finished with 210/0 on the board.

In response, Kolkata needed partnerships right from the get-go but Venkatesh Iyer’s sorry season continued as he fell for a duck. Nitish Rana and Shreyas Iyer injected serious pace into the run chase before the former threw his wicket away.

Things worsened when Iyer fell after scoring 50, leaving Sam Billings to do all the work. Unfortunately, his dismissal on 36 meant Andre Russell was slowly running out of partners before Mohsin Khan, the most impressive bowler on the night, sent the big West Indian back to bring down the curtains.

Or so the fans thought. Rinku Singh then combined with Sunil Narine to launch a stunning counter-attack. The duo put on 58 runs in 19 balls, bringing the equation down to 5 runs off the final 3 balls. Marcus Stoinis was under immense pressure, having conceded 16 runs in the first 3 balls.

Out came another twist as Evin Lewis pulled off arguably the catch of the season off the penultimate ball to send Rinku back. Three runs were needed off the final ball and Stoinis nailed the yorker and bowled Umesh Yadav to send LSG into a frenzy.

The loss sends KKR out of the IPL season as they will finish with 12 points. As for Lucknow, they have a great chance of finishing in the top two depending on the Rajasthan Royals (RR) match.

It was always @LucknowIPL’s match to lose but what an incredible innings by #rinkusingh ! He must be disappointed for being so near yet so far but we should be proud of such cameo! #LSGvKKR #KKRvsLSG #KKRvLSG #RPSwing

What an amazing game. Congratulations @LucknowIPL on qualifying for the playoffs. Well played @rinkusingh235 👍 Evin Lewis catch was the difference #TataIPL #LSGvKKR

Heart goes out to Rinku Singh who played splendidly and got out to hell of a good catch. What a brave innings little boy. More coming in your way. #LSGvsKKR #TATAIPL pic.twitter.com/DluymS27Cv

Don’t think we will collectively get over that Evin Lewis catch for a long long time! 🙌🏼 #KKRvsLSG

Love this game of Cricket ❤️ so much #KKRvsLSG

Oh Rinku, what a champion knock! 💪🏼
It took the catch of the tournament to end that onslaught. #KKRvsLSG #WhatAGame

Rinku Singh what a knock, simply wonderful…it once again shows that T20 #cricket can be so heartless despite a blitzkrieg he ends up on the losing side #cricket #crickettwitter #IPL2022 #TATAIPL2022 #KKRvsLSG #KKRvLSG

This sport is so cruel
Today Rinku Singh yesterday Tim David,Both deserved to win the match for their respective team.#IPL

Not the result we wanted but super proud of this effort!

Well Played @rinkusingh235 ! We the All India Twitter Selection Committee forward your name to @bcci 😬#LSGvKKR

You gotta feel for Rinku Singh there. From not finding a place in the XI to almost saving KKR from being eliminated, he gave his all tonight. pic.twitter.com/MQBefKaNiF

Thriller in Navi Mumbai, result down to the final delivery lending in heartbreak for #KKR after a tremendous run chase. Rinku Singh and Narine almost took their team home, but it was not to be. LSG rheough to the play-offs, but kudos to KKR for putting up such a splendid fight

Heart goes out to Rinku Singh who played splendidly and got out to hell of a good catch. What a brave innings little boy. More coming in your way. #LSGvsKKR #TATAIPL pic.twitter.com/DluymS27Cv