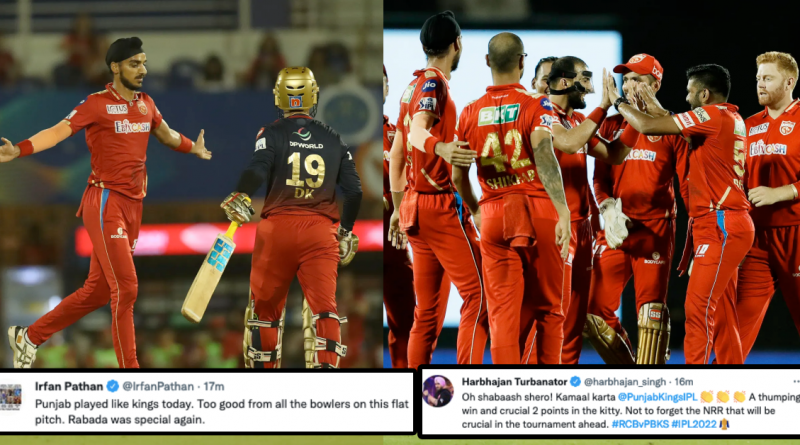 The 60th match of the Indian Premier League (IPL 2022) was played between Faf du Plessis-led Royal Challengers Bangalore (RCB) and Mayank Agarwal-led Punjab Kings (PBKS) at the Brabourne Stadium in Mumbai on Friday, May 13.

Punjab Kings won the game against Royal Challengers Bangalore by 54 runs to bag their 6th victory of the Indian Premier League (IPL) 2022.

Earlier, Royal Challengers Bangalore won the toss and opted to bowl first in the match and they fielded the same playing XI without making any changes to the line-up. On the other hand, Punjab Kings made a solitary change to the playing XI as left-arm spinner Harpreet Brar replaced pacer Sandeep Sharma.

All-rounder Glenn Maxwell opened the attack for Royal Challengers Bangalore against Punjab Kings’ opening duo of Jonny Bairstow and Shikhar Dhawan and he ended up conceding 6 runs. In the 4th over itself, Punjab Kings completed the 50 runs tally. At the end of the powerplay, Punjab Kings were at 83/1.

Wrist spinner Wanindu Hasaranga dismissed his Sri Lankan mate Bhanuka Rajapaksa, who has been in very good form, for 1 in the 7th over.

Opener Jonny Bairstow’s sensational innings was brought to an end by spinner Shahbaz Ahmed in the 10th over. Bairstow smashed 66 runs off 29 balls, including 4 fours and 7 sixes.

For the 4th wicket, Liam Livingstone and Mayank Agarwal had 51 runs partnership in 35 balls before the latter was dismissed for 19 by Harshal Patel’s slower bouncer in the 15th over.

In the end, with the help of Liam Livingstone’s exceptional knock, Punjab Kings were able to score 209 runs. Livingstone scored 70 runs off 42 balls, including 5 fours and 4 sixes.

The best bowlers from RCB were Wanindu Hasaranga, who gave away only 15 runs in his 4-over quota while picking two huge wickets and Harshal Patel, who picked 4 wickets including 3 wickets in the 20th over of the match.

Chasing the target, Royal Challengers Bangalore lost 3 wickets inside powerplay overs. Virat Kohli was dismissed by Kagiso Rabada in the 4th over and Rishi Dhawan dismissed Faf du Plessis and Mahipal Lomror in the 5th over.

Glenn Maxwell and Rajat Patidar added 64 runs off 37 balls together before the latter was dismissed by Rahul Chahar in the 11th over. Soon, Maxwell was also dismissed by Harpreet Brar in the 12th over.

In the end, Royal Challengers Bangalore’s dependable duo of Dinesh Karthik and Shahbaz Ahmed failed against the Punjab Kings bowling unit and the Mayank Agarwal and co. won the match comfortably.

Punjab never let them into the game. Superb Bowling. @KagisoRabada25 @rdchahar1 and all of them got wickets! #PBKSvRCB #IPL2022

Punjab on a wing and prayer now! Their Game against Delhi should be a virtual knockout bout now #PBKSvRCB #RCBvsPBKS

Punjab played like kings today. Too good from all the bowlers on this flat pitch. Rabada was special again.

Oh shabaash shero! Kamaal karta @PunjabKingsIPL 👏 👏 👏 A thumping win and crucial 2 points in the kitty. Not to forget the NRR that will be crucial in the tournament ahead. #RCBvPBKS #IPL2022

It has gone downhill very quickly for #RCB and they need to be very careful of that NRR. The best they can do is get to 16 and hope there are only 4 teams there.

A lot of onus of this loss for RCB has to be on the shoulders of Hazlewood & Siraj. Your two main bowlers can’t be going for a combined 100 runs in just 6 overs. And that too wicketless.

Since 2018 Punjab have been a good team tactically. Their plans to batters are well thought. Last 4 seasons they have been just 1 win away from the playoffs in spite of lacking batting/bowling depth. High time they have some luck going their way. This could be the year? #IPL

Anil Kumble has 99 problems but defeating RCB isn’t one of them. pic.twitter.com/CL8NCm4iCU

Virat Kohli not in a Good Form.

Rcb fans including me- pic.twitter.com/9XYEOxP8zV

What a start to the weekend 😉