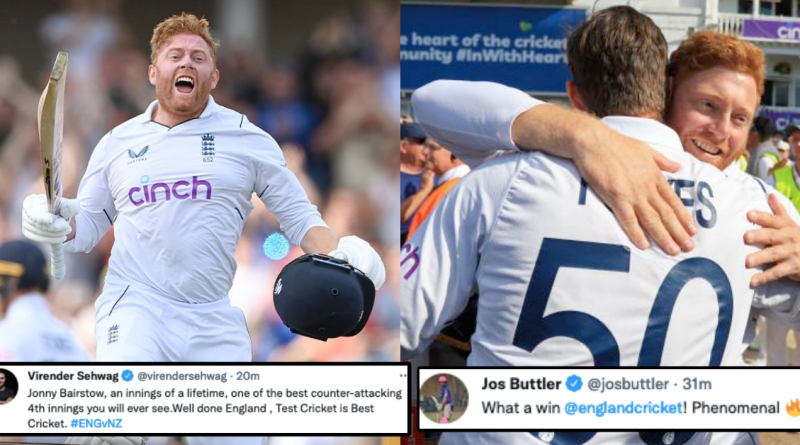 
England successfully chased down the 299-run target set by New Zealand on the fifth day of the second Test at Trent Bridge Nottingham, thanks to a brutal 136 from Jonny Bairstow and similarly belligerent 75* from captain Ben Stokes and gained a 2-0 lead in the three-Test series.

England captain Ben Stokes had won the toss and chosen to bowl first but would have regretted his decision as New Zealand went on to pile up 553 runs in their first innings. Daryl Mitchell hit his second straight century in the series, making 190 with 23 fours and 4 sixes, while Tom Blundell made up for the missed ton at Lord’s, but making 106 with 14 fours here in Nottingham.

In reply, England were very good in their first outing as Joe Root continued his golden run with the bat, scoring 176 with 26 fours and 1 six, while Ollie Pope hit his first Test century at the new no.3 spot, making 145 with 13 fours and 3 sixes. Apart from these two, Ben Stokes made 46 and Ben Foakes made 56 runs, as England piled 539 in reply.

Trent Boult for New Zealand picked a fifer, while James Anderson had completed his 650 wickets in Tests during this Test match.

New Zealand were aiming to make the most of the slender 14-run lead and Will Young (56), Devon Conway (52), and Daryl Mitchell (62*) did well to conjure runs against a determined England bowling and managed to make 286 runs in their second innings, with a lead of 298 runs to boot for.

When England came out to chase the tough target, Trent Boult hurt them badly by picking wickets of Zak Crawley for 0 and Joe Root for 3, while Tim Southee removed Alex Lees for 44 and Matt Henry got rid of Pope for 18 runs. At 93/4, England was staring down a defeat, but then Jonny Bairstow and Ben Stokes came together.

Bairstow slammed 7 sixes and 14 fours in his 136-run knock, before it was ended by Boult, but Stokes played a captain’s knock, hitting 75* with 10 fours and 4 sixes as England achieved the target with 5 wickets to spare.

The Twitterverse was elated with England winning the match and going 2-0 up in the three-match series against New Zealand and praised the team, Jonny Bairstow and Stokes on the social media site.

Here’s how twitter reacted to England’s thumping victory over New Zealand in the 2nd Test:

Today, T20 cricket has shown how it has improved Test Match cricket. What a great test match and well done @englandcricket 🏏 #mindset #ENGvNZ

Jonny Bairstow, an innings of a lifetime, one of the best counter-attacking 4th innings you will ever see.Well done England , Test Cricket is Best Cricket. #ENGvNZ pic.twitter.com/BV5dVzbIqk

What a win @englandcricket! Phenomenal 🔥

The only trouble with England’s cricketers providing such incredible entertainment for free is how many complaints there will be for a slow day’s play at full price….

What a phenomenal test match!! Amazing skill, talent and hard work throughout backed up by an amazing ground yet again @TrentBridge!! One of @englandcricket best wins!!! 🔥🔥 #ENGvsNZ

What a chase #EngvNZ Knock of his life @jbairstow21 Brilliant 👏👏👏

What a game of Test Cricket and an unbelievable 4th innings hundred by @jbairstow21 .
It’s amazing to see a packed house at Trent Bridge on Day 5. Hopefully offering cheaper/free tickets is something that continues as the atmosphere has been fantastic to watch on tv. 👏🏻

One of the greatest ever victories 🙌

This is utterly ridiculous .. Last time I saw this type of drama was in 2019 when Jonny was sat on the balcony watching Ben .. Now Ben has the best seat in the house watching Jonny .. #ENGvNZ

I mean. Stokes and Bairstow. Bairstow and Stokes. I think these two might actually cure me. #ENGvNZ