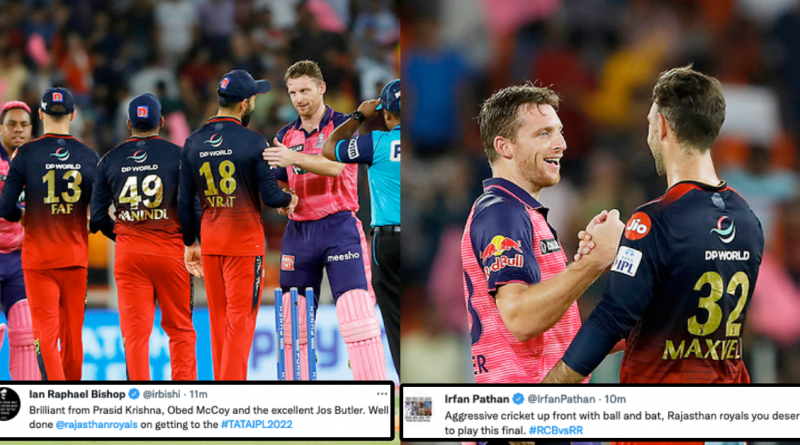 Inaugural champions Rajasthan Royals won the match by 7 wickets against Royal Challengers Bangalore to seal a spot in IPL 2022 final. Now, they will lock horns with Gujarat Titans on May 29 at the Narendra Modi Stadium, Ahmedabad.

Earlier, Rajasthan Royals, surprisingly, won the toss and decided to bowl first in Qualifier 2 and they made no changes to the playing XI. On the other hand, Royal Challengers Bangalore got what they wanted as Faf du Plessis said that they were looking to bat first and they also fielded an unchanged playing XI.

In the second over, Prasidh Krishna got the first breakthrough for Rajasthan Royals by dismissing Virat Kohli on the 5th ball of the over for 7.

After losing Kohli, skipper Faf du Plessis and Rajat Patidar batted decently and at the end of the powerplay, RCB were at 46/1. Du Plessis and Patidar completed 50 runs partnership in 39 balls and after 10 overs RCB were at 74/1.

Obed McCoy broke the 70 runs partnership between Du Plessis and Patidar by dismissing the RCB skipper on the 4th ball of the 11th over and Du Plessis scored 25 runs off 27 balls, including 3 fours.

Also, Glenn Maxwell scored 24 runs at a strike rate of 184.62, including 1 four and 2 sixes, before getting dismissed by Trent Boult in the 14th over.

In the 16th over off-spinner Ravichandran Ashwin picked a huge wicket of dangerous Rajat Patidar, who had smashed a century in the Eliminator. Patidar scored 58 runs off 42 balls, including 4 fours and 3 sixes.

Chasing the target, Rajasthan Royals openers – Jos Buttler and Yashasvi Jaiswal – were off to a flying start. They added 61 runs off 31 balls before Jaiswal was dismissed by Josh Hazlewood in the 6th over for 21.

Wanindu Hasaranga dismissed Samson on the 4th ball of the 12th over during RR’s chase and the Rajasthan Royals captain got out after scoring 23 runs off 21 balls, including 1 four and 2 sixes.

In the end, Jos Buttler smashed his 4th century of the Indian Premier League 2022 and took Rajasthan Royals past the finish line. Buttler’s innings ended at 106* runs off 60 balls, including 10 fours and 6 sixes.

When you score 4 centuries in a season scoring 800+ runs you definitely deserve a chance to play in the final. Congratulations & Well done @josbuttler @rajasthanroyals #TataIPL

Absolutely dominating performance by Rajasthan Royals in all the departments. Jos Butler scored 106 runs out of 161 runs scored by Rajasthan. Tough luck for RCB fans, yet again. #RCBvsRR #TATAIPL2022 pic.twitter.com/KMpPNYmyHg

Aggressive cricket up front with ball and bat, Rajasthan royals you deserve to play this final. #RCBvsRR

Brilliant from Prasid Krishna, Obed McCoy and the excellent Jos Butler. Well done @rajasthanroyals on getting to the #TATAIPL2022

The @josbuttler did it again!@rajasthanroyals into their first @IPL Final since the inaugural edition in 2008 when Shane Warne led them to glory. #RajasthanRoyals #Buttler #Platinum

We Rajasthan Royals supporters have waited fourteen years for this.

I know, nobody remembers the runners-up, but the end of a wait this long deserves to be cherished.

Universe JOS!!! What a season he is having. Lot of clutch knocks. #IPL

Rajasthan Royals enter the IPL final for the first time since the inaugural edition in 2008. They won it that time. Are they going to win it now? It’s going to be a battle between two sides who finished as the top two teams in the league stage.#RRvRCB

Rajasthan Royals reach their first IPL Final since Shane Warne led them in 2008.

Royal Bangalore is always the Challengers, never the Champions.

Warnie would’ve been proud of this lot. #RajasthanRoyals

RCB fans were making fun of Jos Buttler that he isn’t consistent, and have been very lucky, today Jos Buttler destroyed RCB alone and scored 4th hundred in front of them. @josbuttler 🔥

RCB have been in Playoffs 8 times and looks like it’s the 8th heartbreak. They’ve played well throughout the season.

You took us on a roller-coaster ride @rcbtweets. And everyone hopped on to it. Wish you well next year.

Mantra for IPL teams: Qualify as number 2 from points table to play finals.

A team that carried a non-performer like Kohli for 16 games really doesn’t deserve to be in the final. Rajasthan, on the other hand, have come this far despite losing 13 out of 16 tosses.

No trophy till you kick that panauti out from team.#IPL2022

Playing 3rd concecutive playoffs and this time even reaching Qualifier 2 is surely an improvement but it’s the entire legacy of #RCB that matters. 15 years of IPL and still not a single trophy seriously hurts. 💔

Like every other season, we move to yet another year with hope. ✨

Almost 14 years since I was a little kid watching Shane Warne and that incredible team lift the trophy, now RR are in their first IPL final since then! Just brilliant! Shane Warne would be proud for sure 😭♥️ #RRvsRCB