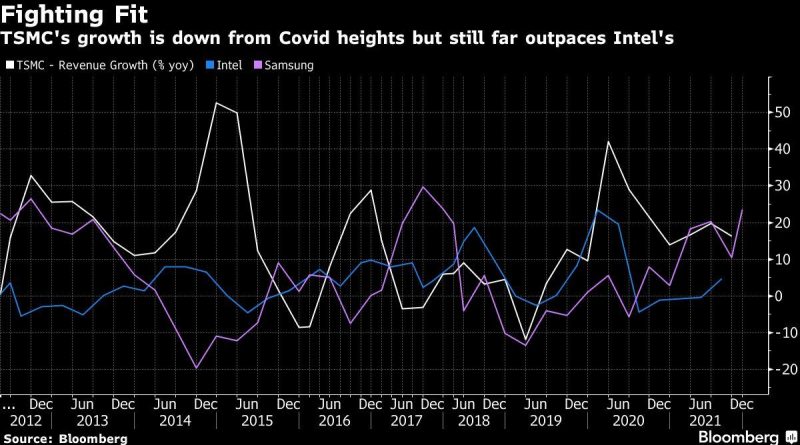 
(Bloomberg) — Taiwan Semiconductor Manufacturing Co. projected quarterly revenue well ahead of estimates, underscoring the voracious demand for new iPhones and chips that power everything from TVs to cars.

Asia’s most valuable company foresees sales of $16.6 billion to $17.2 billion in the first quarter of 2022, at least 5% ahead of analysts’ average projection. Apple Inc.’s most important chipmaker also intends to spend $40 billion to $44 billion expanding and upgrading capacity in 2022, up more than $10 billion from last year.

Both numbers affirm TSMC’s pole position in the market during an unprecedented chip shortage triggered by the pandemic, a global deficit that’s walloped the production of automobiles, mobile phones and game consoles. With the crunch showing no signs of abating, TSMC has been running at near-full capacity over the past year and is now investing heavily in new fabs from its home island to Japan and the U.S. to meet future demand.

Steady investments have helped it maintain a technological lead over Intel Corp. to Samsung Electronics Co., which served it well in 2021. The Taiwanese company reported a better-than-expected 16% jump in net income to a record NT$166.2 billion ($6 billion).

Delivery times for chips increased by six days to about 25.8 weeks in December compared with November, according to research by Susquehanna Financial Group. That lag marks the longest wait time since the firm began tracking the data in 2017.

Analysts expect TSMC to further boost its capital expenditure plans to increase supply. The company has said investments in a Japan fab for more mature technologies will be “incremental” to the $100 billion spending it had previously announced.

Sales in the December quarter reached NT$438.2 billion, also a record, based on previously released monthly revenue numbers. The company now expects revenue growth of 15% to 20% on average in coming years, up from previous projections.

“TSMC is most likely to raise its $100 billion capex plan for 2021-23E to meet its increasing customers’ demand,” Citigroup analysts wrote in a note this week. “TSMC is on track to become the largest semiconductor company worldwide in terms of revenue before 2024E with continuous rise in earnings and increasing returns to investors.”