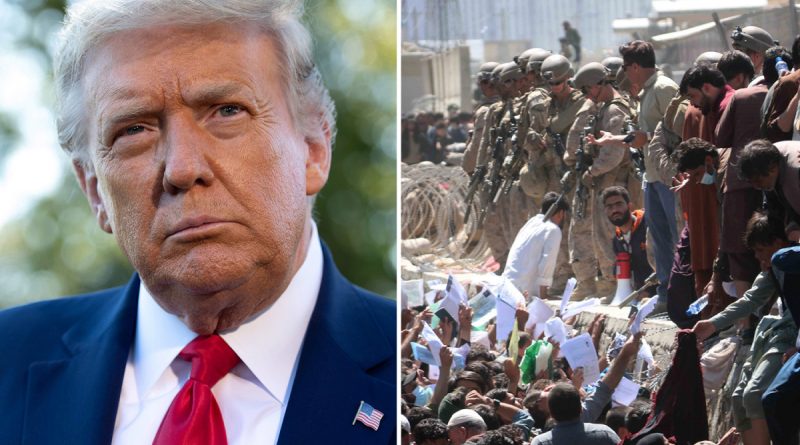 
DONALD Trump on Tuesday blasted Joe Biden claiming the US should have “let Afghanistan rot years ago” after his former officials suggested the US should re-invade.

The former president said Biden should “apologize to the whole world” for the chaos caused as the US was forced to scramble to evacuate by the August 31 deadline when the Taliban regained control of the country.

Trump said that the last two weeks were a “disaster” and brought “humiliation” on the nation as he suggested that he would have brought victory if he was still in office.

Biden’s chaotic exit was met with a terror attack at Kabul airport that killed 13 US service members and almost 200 Afghans.

A US soldier had not been killed in more than a year until last week under the terms of the withdrawal agreement negotiated by Trump.

“They told us to get out, they gave us a date and that was it.”

“They [the people supposedly controlling Biden] do horrible things, vicious things. They cheat, steal, and lie. But they can’t do a simple withdrawal from a country that we should never have gone into in the first place.

“We should have hit that country years ago, hit them really hard, and then let it rot.”

Trump then insisted that Biden “owes an apology.”

The former president also claimed that the US was close to “victory” in Afghanistan under his administration.

Trump added: “The platter was set, we were set to have a victory in terms of getting out and getting out with dignity and you could even say with victory and it was all lined up.

He continued that the Taliban was “petrified of us.”

“They were staying away and all he had to do was take what we didn’t, finish it up, and take all the equipment out,” he said.

Trump’s comments came just hours before Biden again slammed him for striking the original withdrawal deal with the Taliban.

The ex-president had negotiated a May withdrawal date with the Taliban which Biden was forced to push back.

Trump had also already brought down US troop levels to 2,5000 in Afghanistan by the time he left office.

The US ended its longest war in history on Monday after 20 years as the last plane left Kabul just a minute before midnight.

It had started under George W Bush after the September 11 attacks and lasted through the Obama, Trump, and into the Biden administrations.

Biden said on Tuesday that between 100 and 200 Americans still remain in Afghanistan and the US will aid those who wish to leave.

He has said that if the withdrawal date was pushed back again it would have caused conflict.

Biden added on Tuesday that he was “not going to extend the forever war” again as it would have required more troops returning to the nation and potentially sparked a civil war.

During Tuesday’s interview, Trump also criticized Biden for his behavior during the ceremony when the US fatalities were brought back home.

“He kept looking at his watch yesterday,” Trump said.

Trump also repeated claims that the US should have kept a base in Afghanistan or ensured all equipment was brought back or destroyed.

“This is a $10 billion base they built over years and it is there and built and it is in perfect territory for us to have as an outpost and what they’ve done, many people are there, many left behind,” he said of Bagram.

“I actually said every nail, every screw, I want everything out. And the people out, obviously. You start with the people and then the equipment. And then you blow up what you want to blow up and you keep maybe Bagram, because we were planning on keeping Bagram because of its relationship, its location to China.”

Trump’s statement about keeping a base in Afghanistan came after some of his former officials claimed that the US should return to take on the Taliban regime there again, even as Americans were being evacuated.

Senator Lindsey Graham stated that the US needs to “reestablish our presence in Bagram as an alternative to the Kabul airport.”

“The retaking of Bagram would put our military at risk, but I think those involved in the operation would gladly accept that risk because it would restore our honor as a nation and save lives,” Graham added.

He claimed it was only a “problem of will” that the US had not done so already as he also called for Biden to be impeached.

Biden continued to defend the withdrawal on Tuesday, calling it a success.