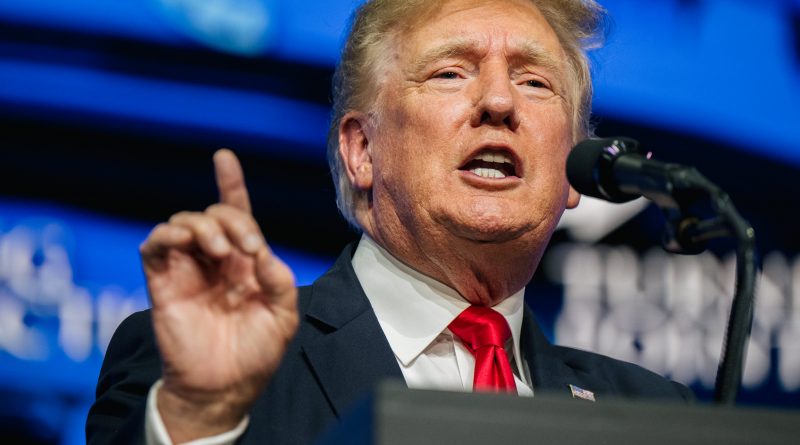 
Former President Donald Trump’s political action committees combined to spend just over $7.9 million on legal fees, with much of it going toward lawyers who attempted to overturn the 2020 election and defended him during his second impeachment trial.

Four committees linked to Trump made the payments during the first half of 2021, filings show. The Make America Great Again PAC paid out just over $7.8 million of the total legal expenditures. The committee is Trump’s former campaign account. His team turned it into a PAC earlier this year.

Trump’s leadership PAC, Save America, spent just over $50,000 in legal fees, while its sister joint fundraising committees paid out around $40,000. The Trump Make America Great Again Committee, which raised money with the Republican National Committee, spent nearly $37,000 on legal costs.

Trump announced over the weekend that his committees raised nearly $82 million and has over $100 million on hand. The former president did use fundraising promotions during both his election challenge and impeachment to raise cash for both legal efforts.

The payments started in early January after multiple lawsuits from Trump and his Republican allies were tossed out in key states such as Pennsylvania, Wisconsin, Arizona, and Michigan. The checks continued to go to legal firms through Trump’s impeachment trial, where he was impeached for a second time by the House of Representatives and exonerated by the Senate. There are some payments to legal advisors as recently as June.

Asked about the legal costs, Jason Miller, a spokesman for Trump, pointed to the impeachment fight. The House, largely along party lines, although several Republicans voted with Democrats, impeached Trump for inciting the deadly Jan. 6 riot on Capitol Hill. The Senate acquitted him, but some Republicans joined Democrats in voting to convict.

“It’s a shame that national Democrats, obsessed with trying to prevent President Trump from running and winning again in 2024, pursued another failed impeachment effort earlier this year. While this partisan charade was soundly defeated, and President Trump was completely exonerated, these things cost money,” Miller said in an email on Monday.

Trump’s lawyers reaped a windfall during his impeachment trial.

Kasowitz, Benson, Torres, a firm founded by longtime attorney Marc Kasowitz, received $2.5 million from Trump’s Make America Great Again PAC. Eric Herschmann, a partner at the firm, was hired by Trump in January to assist on the first legal impeachment defense in 2020. He later joined the White House as a senior advisor and it remains unclear what the payment was for.

Miller and Kasowitz did not respond to requests for comment on the payment to the firm.

The MAGA PAC paid the firm run by Michael van der Veen just over $575,000. Along with van der Veen, Bruce Castor, who also works at the same firm, was part of Trump’s second impeachment defense team.

David Schoen, another member of the Trump impeachment, was paid over $100,000 by the former president’s PAC.

None of the FEC records show legal service payments to Rudy Giuliani, who has called the president a client and publicly challenged the results of the election.

The former New York mayor has been suspended from practicing law in the state after his false election claims. He is under investigation for allegedly not registering as a lobbyist for entities who were seeking various actions related to Ukraine, including the removal of the American ambassador under Trump.

The Make America Great Again PAC did pay Giuliani’s security firm, Giuliani Security & Safety, just over $76,000 for travel expenses. “Mayor Giuliani was reimbursed for expenses only,” Miller told CNBC. Giuliani had said that he would work for Trump for free.

Jenna Ellis, one of Trump’s legal advisors during the recount, was paid more than $22,000 for her services.

Ellis defended the former president and the payments she received in an email to CNBC.

“I was paid in full according to the terms of my representation. President Trump always treated me with fairness and respect for my work and advocacy for him. He is the best boss I have ever had,” Ellis said on Monday.

Elections LLC, which was launched by former Trump deputy White House counsel Stefan Passantino, according to Center for Responsive Politics investigative researcher Anna Massoglia, received over $200,000 this year between multiple Trump PACs, according to the new records. The FEC filings do not say whether the payments were related to the election. Passantino did not respond to requests for comment.

A website that tracks the lawyers who worked on efforts to overturn the election for Trump shows that many of those attorneys were paid six figures for legal fights they ended up losing. In February, the Make America Great Again PAC paid the Hilbert Law Firm just under $380,000 for legal help with the recount.

That firm led failed legal fights in Georgia. According to the Wall Street Journal, Kurt Hilbert, a founder of the firm, was on an infamous January phone call between Trump and the Georgia Secretary of State Brad Raffensperger. Trump urged Raffensperger to overturn then-President-elect Joe Biden’s victory in the state.

“I would like to suggest that just four categories that have already been mentioned by the president that have actually hard numbers of 24,149 votes that were counted illegally. That in and of itself is sufficient to change the results or place the outcome in doubt, Hilbert said on the call, according to the Journal’s transcript.

Hilbert declined to comment on the payments made by the PAC to his firm. But he again pushed the idea that there were election irregularities in Georgia.

“This evidence cannot be ignored,” Hilbert told CNBC in an email.

Courts, state election authorities and the U.S. Justice Department have all said there is no evidence that the election was rigged against Trump.

True North Law, which led a failed fight in swing state Michigan, was paid over $270,000 for their services in January by the same committee. Harvey & Binnall, which was involved in a failed legal fight in Nevada, received over $300,000 in payments from January through June by the Trump PAC.

True North Law did not respond to requests for comment.