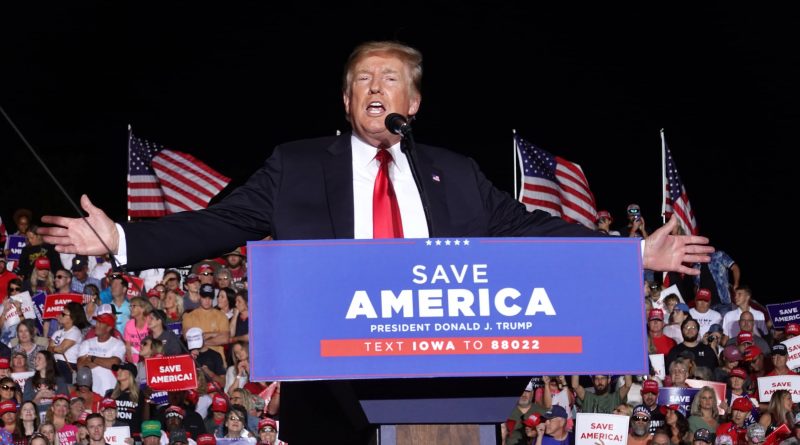 Former President Donald Trump speaks to supporters during a rally at the Iowa State Fairgrounds on October 09, 2021 in Des Moines, Iowa.

Former President Donald Trump announced Wednesday he will be launching his very own media network, including a social media platform called “TRUTH Social,” in order to “stand up to the tyranny of Big Tech.”

The app appears to be the first project of the Trump Media and Technology Group (TMTG), which will list on the Nasdaq through a merger with Digital World Acquisition Group, according to an announcement tweeted out by spokeswoman Liz Harrington. The transaction values TMTG at up to $1.7 billion, Harrington said.

The new company, which lists Trump’s private membership club Mar-A-Lago as its address, will be chaired by the former president, who says that this “group’s mission is to create a rival to the liberal media consortium.”

“We live in a world where the Taliban has a huge presence on Twitter, yet your favorite American president has been silenced,” Trump claimed.

Trump was notoriously banned by major social media giants earlier this year, following his posts related to the January 6 riots at the United States Capitol Building.

The move doesn’t come as a total surprise. Trump and his team of advisors have dropped hints for months that he might launch his own social media app to rival Facebook and Twitter.

According to the press release, TRUTH Social is currently available for pre-order in the Apple App store, and a beta version will be available to invited guests starting in November 2021. A nationwide rollout is expected in the first quarter of 2022, the release said.

The release also noted TMTG intends to launch a subscription video-on-demand service which would would feature “non-woke” entertainment programming, news and podcasts.

For those who register online to receive emails from TMTG, the terms of service require that users sign away their right to file a class action.

Digital World Acquisition Group has not yet filed anything with the Securities and Exchange Commission about this merger.